The manifesto was unveiled by senior BJP leader and Finance Minister Nirmala Sitharaman. 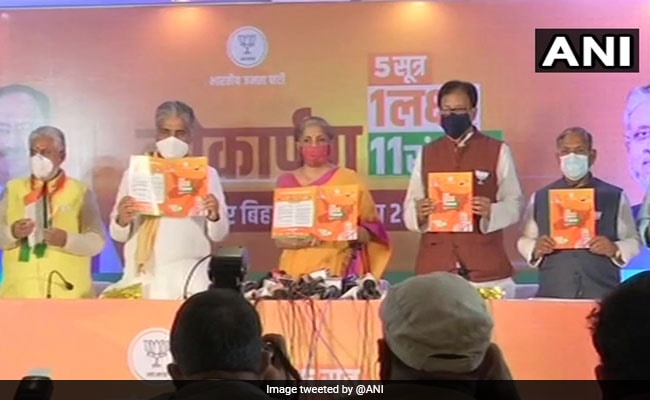 The ruling BJP today promised 19 lakh jobs and free coronavirus vaccination for all in its manifesto for the Bihar election starting next week. The party also stressed that ally Nitish Kumar will be Chief Minister for the next five years.

In an attempt to undercut opposition leader Tejashwi Yadav's promise of "10 lakh government jobs", the BJP's "Sankalp Patra" resolves to generate 19 lakh job opportunities. That the ruling party has almost doubled the figure promised by Tejashwi Yadav is significant, given that Chief Minister Nitish Kumar had recently questioned how he could possibly raise the money to pay for 10 lakh jobs.

Here are the Updates on Bihar Assembly Elections 2020:

Oct 22, 2020 14:56 (IST)
Chirag Paswan's Birthday Wish For "Guardian" Amit Shah Amid Campaign Heat
Chirag Paswan today used his birthday wishes for Union Home Minister Amit Shah to demonstrate his loyalty to the BJP while steadily sharpening his attacks on its ally, Bihar Chief Minister Nitish Kumar. The Lok Janshakti Party (LJP) leader called Amit Shah his "guardian" in a tweet crafted as a message to Nitish Kumar at the peak of the campaign for the Bihar polls starting next week.

"Best wishes to the country's Home Minister, guardian Amit Shah on his birthday. Sir you inspire lakhs of youth like me to do something for the country. May god always keep you healthy," Chirag Paswan tweeted on the senior BJP leader's 56th birthday. Read
Oct 22, 2020 13:27 (IST)
The manifesto, among a number of features, promised free vaccination for Bihar once a Covid vaccine is found.
"In the fight against coronavirus, the NDA government has set an example in the country. It is our resolution that as soon as the vaccine will be approved by the Indian Council of Medical Research (ICMR), every person in the State will be vaccinated," the manifesto said.

Oct 22, 2020 12:34 (IST)
Elect BJP Alliance For Fast-Track Development: Dharmendra Pradhan
Union minister Dharmendra Pradhan on Wednesday highlighted achievements of the centre and the Bihar government and appealed to the people to return NDA to power so that more development could be done.

Mr Pradhan said that Prime Minister Narendra Modi has ensured that whatever plans are formulated for the country, the eastern region should get primacy.

Be it schemes in the field of agriculture, education, health, industry or giving home to the poor, people of the eastern region have benefited the most, the Union Petroleum and Natural Gas minister said.

Oct 22, 2020 11:50 (IST)
Free Covid-19 Vaccination In Manifesto
The BJP's manifesto is the first to include a Covid vaccine, which is still work in progress and is being chased by various companies and scientists across the world.

- Free Covid-19 vaccination for all in Bihar

- Making Bihar an IT hub to generate 1 0 lakh jobs

- One lakh jobs in the health sector 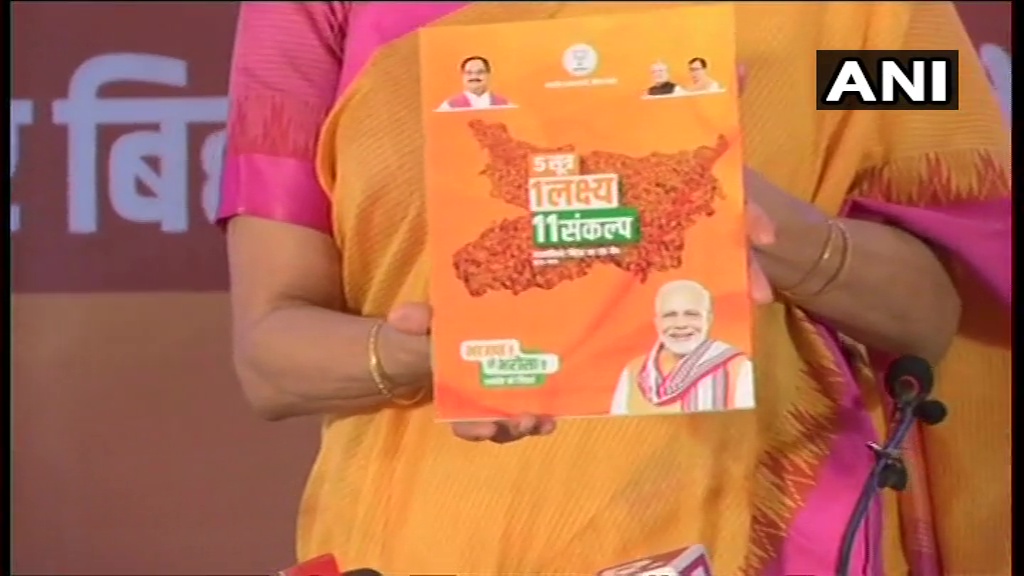