On Saturday Bengal Chief Minister Mamata Banerjee made a public appeal for peace, asking people protesting the Citizenship Act "to not create any disturbance or involve in any kind of violence" 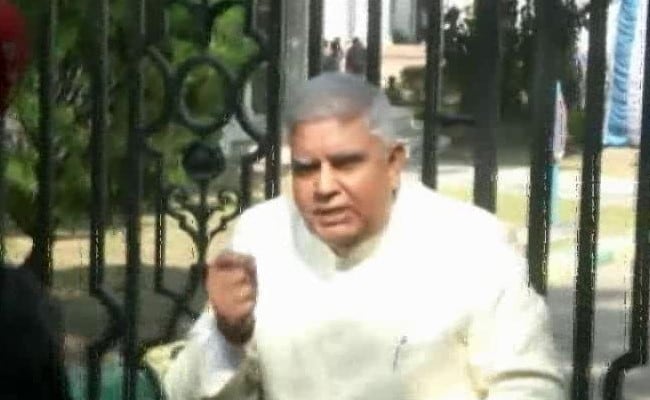 Bengal Governor Jagdeep Dhankar has slammed Chief Minister Mamata Banerjee over advertisements that protest the Citizenship (Amendment) Act, or CAA, and say it will not be implemented in the state. Addressing a press conference this evening, Mr Dhankar also criticised the ruling Trinamool Congress for the use of public funds to pay for the ads that also target the National Register of Citizens (NRC) exercise held in Assam. The Governor has demanded the Chief Minister withdraw these ads, saying "criminal use of public funds (is) against law of land".

"How can an elected head of a government use public money to give advertisement in national media that there will be no NRC, no CAB in state? This advertisement is unconstitutional," Jagdeep Dhankar told reporters.

"As constitutional head I had very gracefully invited her (the Chief Minister's) attention and urged her (to) withdraw it. I am sure you all will agree that public money can't be used to lead an agitation against law of the land," the Governor, who has repeatedly clashed with the Chief Minister over the past few months, added.

The Governor also described the law and order situation as "unimaginable" and said public property was being damaged in a wanton manner. His comments came shortly after the Bengal government said internet services in certain parts of the state would be temporarily suspended.

In a statement the government said that despite repeated requests and advisories "some externally mobilised communal forces (were) inciting violence and conspiring to create disorder".

Mamata Banerjee is one of three Chief Ministers who have said the citizenship law will not be enforced in their state, sparking a potential legal tug-of-war between themselves and the centre; the other states are Kerala and Punjab.

On Friday the Chief Minister announced a series of rallies across the state to protest a law she said would "divide India". Last week Ms Banerjee said discrimination on the basis of religion was unacceptable and said she was equally opposed to the implementation of the NRC in the state.

Massive protests have broken out in the North East, in Bengal and Delhi - where large crowds, including students from Jamia Millia Islamia University, clashed with cops this evening in a posh residential colony - against the citizenship law, which seeks to make Indian citizens of non-Muslim refugees from Afghanistan, Pakistan and Bangladesh. The protesters say the new law is discriminatory and argue citizenship cannot be given on basis of religion.

The violence, which began in the North East, spilled over into Bengal, where empty trains were set on fire and, this morning, internet was suspended; according to news agency ANI the District Magistrate has blocked internet services in Malda district for a 48-hour period.

On Saturday Ms Banerjee made a public appeal for peace, asking protesters "to not create any disturbance or involve in any kind of violence."

Bengal BJP leader Dilip Ghosh has alleged vandals and arsonists in the state have the support of the ruling Trinamool Congress and that the suspension of internet is a "ploy of the government to prevent the real picture from coming before the public".

A Jaspal Bhatti Gem Is Viral Amid Maharashtra Crisis. Twitter's Lovin' It