According to police, Mangin Khalhau who is also known as Veeraappan for his involvement in alleged wood smuggling, was the only senior member of the outfit that lost several leaders to police encounter. 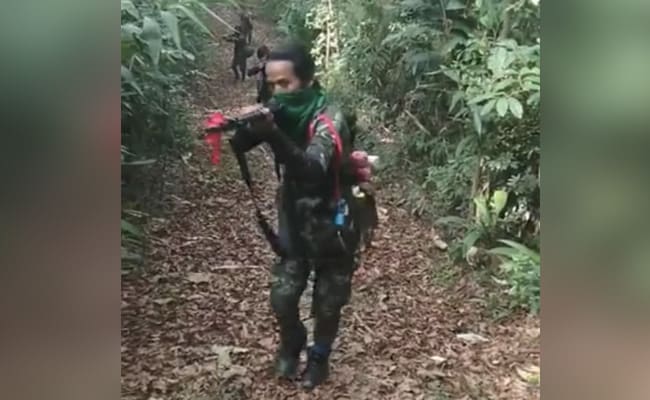 The self-styled commander-in-chief of the outfit had several bullet marks on his torso, police said

A self-styled commander-in-chief of the United People's Revolutionary Front (UPRF) died on the intervening night of Saturday and Sunday after being shot by his own cadres at Karbi Anglong districts in Assam's southern hills following an inside tussle leaving the group leaderless.

According to police, Mangin Khalhau who is also known as Veeraappan for his involvement in alleged wood smuggling, was the only senior member of the outfit that lost several leaders to police encounter while several others surrendered over the past one year.

On Sunday, a conflict broke out within the group over its internal issues at Khengpibung, a hilly terrain in the outskirts of Bokajan town, about 56 km from Karbi Anglong district headquarters Diphu and about 15 km from neighbouring state Nagaland's commercial hub Dimapur.

"Mangin have received several rounds of bullets to his torso and was recovered dead by police Sunday morning. It is suspected that he was shot dead by his own cadres," police said.

The body was taken to a hospital in Bokajan from where, it has been sent to Diphu for postmortem autopsy.

UPRF is an outfit consisting mostly of cadres belonging to the Kuki community residing in Assam's southern Hills and had earned certain notoriety in the past decade mostly in and around the Singhasan Hills after it had procured assault rifles from Yunan-based ordnance factory in China via Myanmar.

However, after its Commander-in-Chief Martin Guite was gunned down in Singhasan Hill last October in a police encounter, the outfit decided to surrender.

In a letter to the then Assam Chief Minister, Sarbananda Sonowal, the outfit expressed its interest in "permanent peace and harmony" and declared "unilateral cease fire" for two months and also shared a list of its 40-50 cadres' identity.

Last December, when the dreaded Drishti Rajkhowa from United Liberation Front of Asom-Independent had laid down his arms, 32 cadres of UPRF along with 31 other cadres from various fringe outfits had followed suit.