Assam: The madrassa had 224 resident students, who were moved out of the facility last night to pave the way for its demolition 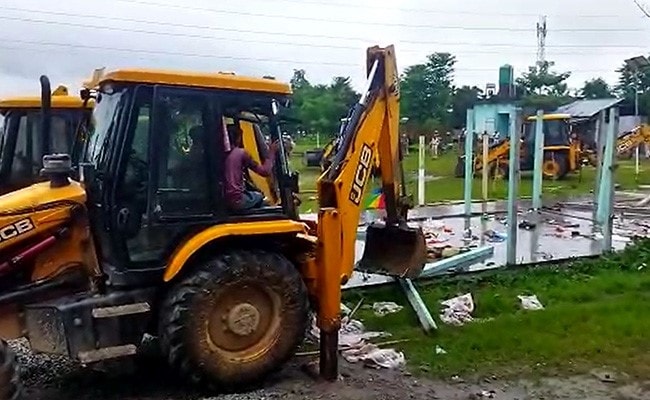 Bulldozers moved in to demolish a private madrassa in Assam's Bongaigaon district today.

The Assam government today ordered the demolition of Markazul Ma-Arif Quariayana Madrassa in Bongaigaon district after Hafizur Rehman, one of the teachers at the institution, was arrested last week over his links with the AQIS sleeper cell modules in the state. He was brought to the madrassa yesterday for further investigations. The madrassa had 224 resident students, who were moved out of the facility last night to pave the way for its demolition. According to government sources, these students will be accommodated at other institutions.

Though unsafe and hazardous conditions at the madrassa have been officially cited as the reasons behind its demolition, the facility's link with terror outfits is believed to be the real reason. Police officials said documents related to banned radical groups were found at the madrassa. Rehman was arrested under the Goalpara module, which has so far arrested five people with links to Jehadi organisations. Two Imams were also arrested.

The demolition order was issued by the Executive Magistrate of North Salmara, saying that the institution did not possess necessary documents to carry out multipurpose activities on a single campus with multiple buildings and was accommodating an unspecified number of persons. The building was considered hazardous as it had insufficient provisions to mitigate any possible disaster.

This is the second private madrassa to be demolished this week, and the third in the state, after the Jamiul Huda Academy Madrassa was bulldozed in Barpeta district last Monday as Chief Minister Himanta Biswa Sarma claimed that there was no academic activity at the madrassa and it was being used as a training hub by Al Qaeda terror group.

Following the demolition of the madrassa in Barpeta district, Mr Sarma had said: "This is the second madrassa we have demolished [in Assam] as these institutions were being used as a hub for terrorism." The demolition came after the arrest of two brothers, Akbar Ali and Abdul Kalam Azad, in Barpeta last Saturday, who had privately built the Jamiul Huda Academy Madrassa. The brothers reportedly had links with Al Qaeda-backed Jihadi modules and were missing since March this year.