PM Modi provided a broader context to the issue, saying those the bill would help are also "children of Ma Bharati" 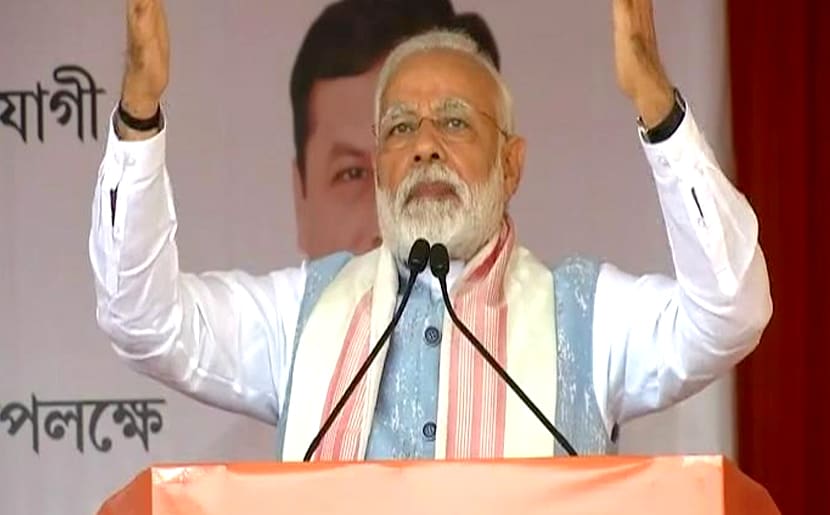 In Assam, PM Modi detailed the initiatives that show his government's emphasis on the northeast.

Prime Minister Narendra Modi, who landed in Assam's Guwahati amid black flag protests, tried to address people's concerns today about the citizenship bill, saying his party is committed to protecting the culture and resources of the northeast. Without naming any party, he said "Those who sit in AC rooms in Delhi" are spreading "misinformation" about the bill.

The Citizenship Bill, one of the key projects of the government, envisages a smoother and quicker grant of citizenship to illegal migrants from the minority communities of Bangladesh, Pakistan and Afghanistan after six years' stay in India.

But it has had the northeast -- an area sensitive to the preservation of culture that entry of foreigners may endanger -- up in arms.

The protests have spiked particularly in Assam, where inflow of illegal migrants from Bangladesh is a huge social and political issue.

PM Modi earlier provided a broader context to the issue, saying those the bill would help are also "children of Ma Bharati".

"Be it from Pakistan, Afghanistan, or Bangladesh... they were all a part of India once... but after partition, when the country was divided, they became minorities in their own country, be it Sikhs, Jains, Buddhists, Parsis, Christians, and Hindus... We must understand the pain of these people... they must now get their recognition as Indian citizens," he said today.

The Congress has taken on the BJP over the Citizenship Bill, pointing out that while considering candidates for citizenship, the Bill only looks at religious persecution, not social or political discrimination.

But the Prime Minister today took on the Congress, reminding the people that in the last 35 years, the Clause 6 of the Assam Accord -- which promises comprehensive safeguards to the cultural, social and linguistic identity -- has not been implemented.

Before the BJP won the 2016 assembly elections, the Congress had ruled the state for 15 straight years. For 10 of those years, the party ruled at the Centre too.

The row over the Citizenship Bill is seen to be a growing hurdle for the BJP in the northeast, which has a crucial role in PM Modi's "Look East policy" - the expansion of strategic ties across southeast Asia. From practically no footprint in the area, the BJP has managed to bring all seven states under its control over the last four years.

But in the few short months since the bill was introduced, unrest has been spreading among the BJP allies in the northeast.

Regional ally Asom Gana Parishad has ended its partnership with the BJP over the bill, which has already been passed by the Lok Sabha and could be tabled soon in the Rajya Sabha. Ten of its allies have decided to oppose the bill, indicating that if the Centre does not bend, they would walk out of the 13-party Northeast Democratic Alliance -the anti-Congress platform through which the BJP made inroads in the northeast. Even some of the BJP's own leaders in the area have spoken against the bill.

Today, PM Modi detailed the initiatives that show his government's emphasis on the northeast.

"I am proud that under the BJP, two great personalities from Assam, Gopinath Bordoloi and Bhupen Hazarika were given Bharat Ratna. Our objective is 'infrapush northeast, digital push northeast'. In the interim budget, we have given a lot of emphasis on the development of the northeast. We have given 21 per cent hike in allocation for the northeast. Assam budget is widely talked about," he said.