As GN Azad Quits, All Eyes On Other Dissident Congress Leaders

With yet another high-profile exit from the Congress party, there is speculation that more dissident leaders will follow 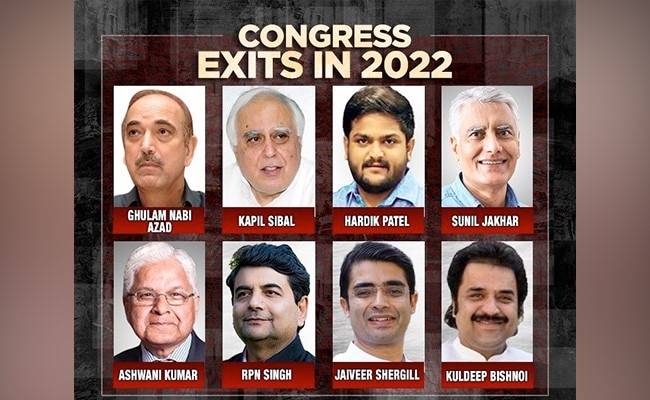 Eight prominent Congress leaders have quit the party so far in 2022.

Ghulam Nabi Azad, a Congress veteran of more than five decades, today quit the party. With yet another high-profile exit from the party, there is speculation that more will follow.

Earlier this month, Mr Azad had declined to accept the position of the Chairman of the party's campaign committee in Jammu and Kashmir. He is now the eighth leader to quit the Congress so far this year, after Hardik Patel, Jaiveer Shergill, Kapil Sibal, RPN Singh, Sunil Jakhar, Ashwani Kumar and Kuldeep Bishnoi. With the next Lok Sabha elections less than two years away and elections in Gujarat and Himachal Pradesh coming up, the rumblings of rebellion within the Congress are growing louder by the day. A total of 29 leaders and prominent members have quit the party since 2019.

Political observers are now closely watching which way some of the other party leaders like Shashi Tharoor, Manish Tiwari, Anand Sharma go, who, along with veterans like Mr Azad and Mr Sibal, are part of what is known as the "G23" - the group of dissident leaders within the Congress. Earlier this week, Mr Sharma had resigned from the Chairmanship of the Congress Steering Committee for the Himachal Pradesh elections.

It is not just veterans such as Mr Azad and Mr Sibal who have called it quits, but even relatively younger leaders like Jyotiraditya Scindia and Jitin Prasada have also left the party in a huff in recent years.

In his five-page resignation letter addressed to Sonia Gandhi, the interim Congress president, Mr Azad said the situation in the party has reached "a point of no return".

"The entire organisational election process is a farce and a sham. At no place anywhere in the country have elections been held at any level of the organisation," Mr Azad said in his letter. While election to the Congress president's post was scheduled to be held on September 20, the party decided to postpone it by a month, citing an "inauspicious month".

In February this year, former Union minister and senior leader Mr Ashwani Kumar announced he was ending his more-than four-decade association with the Congress. In his resignation letter to Mrs Gandhi, Mr Kumar wrote: "In the present circumstances and consistent with my dignity, I can best subserve larger national cause outside the party fold."

In May, Mr Sibal surprised the party when he applied for Rajya Sabha nominations as an independent candidate with the backing of Samajwadi Party. At the time, he had announced that he had ended his three-decade association with the Congress. During the same month, Mr Jakhar and Mr Patel also announced their decisions to leave the party. While Punjab veteran Mr Jakhar said that the Congress was facing an existential crisis, young Mr Patel, believed to be the face of the party in Gujarat, cited his displeasure with the top leadership.