Efforts Being Made To Normalise Islamophobia: Arundhati Roy

Arundhati Roy expressed concern over alleged attempts by the Rashtriya Swayamsewak Sangh to "infiltrate" a section of young minds by enrolling them in "specific camps or schools", run by right-wing organisations. 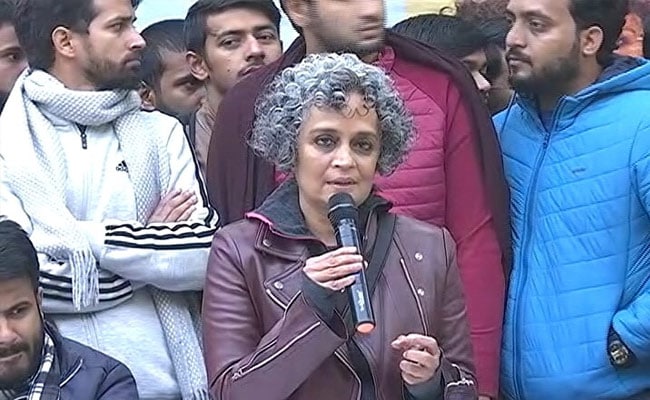 Drawing a parallel between Nazi Germany and present-day India, author-activist Arundhati Roy said she was happy to see that students have come out on the streets in large numbers to protest against the government's "divisive" citizenship law and proposed nationwide NRC.

The writer expressed concern over what she termed "attempts" by Rashtriya Swayamsewak Sangh to "infiltrate" a section of young minds by enrolling them in "specific camps or schools", run by right-wing organisations.

Delivering a keynote address on the first day of the 7th Kolkata People's Film Festival on Thursday, Ms Roy said "efforts were being made to normalise Islamophobia".

The author also contended that the Citizenship Amendment Act would hit hard the economically deprived and marginalized Muslims, Dalits and women at large.

"The rhetoric of political address is at its worst now... as graphic as it is about spreading communal hatred. It is also deceiving in the sense that it hides the true purpose of NRC or CAA from common understanding," the Man Booker Prize awardee said.

The present-day India "where legacy papers act as current-day document" is a slightly upturned version of Nazi Germany, she said.

The author further added that the countrywide mass protests have "blunted the only power BJP/RSS has... that is communal hatred".

Asked about the sit-in protests at Shaheen Bagh, Park Circus and elsewhere, she said, "Muslim women are now coming out to raise their voice and this is a great thing."

"This shows how Muslims can have a voice, so far they had been pushed out of the political arena, pushed out of media.... Earlier, only people who were allowed to speak were the ones like the Moulanas...

"Now there are all kinds of voices.... including a plethora of Muslim voices," she added.