An Argentina-based news channel Cronica TV aired an image of "Apu" a fictional character of Indian ethnicity from the TV show "The Simpsons" on arrival of Prime Minister Narendra Modi. 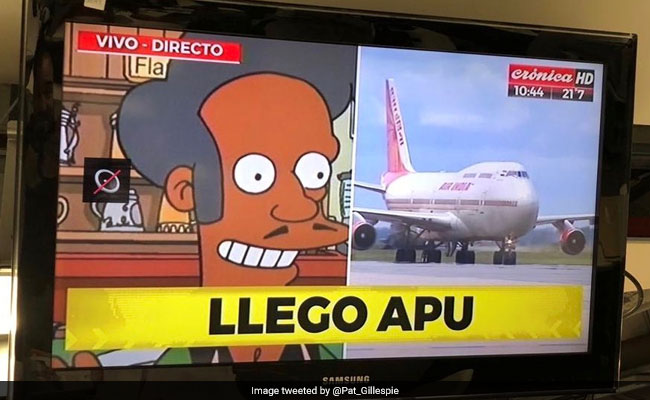 The character of "Apu" from "The Simpsons" has been in controversy for "racial stereotyping".

An Argentina-based news channel is drawing criticism on social media for airing an image of "Apu", a fictional character of Indian ethnicity from the TV show The Simpsons, when Prime Minister Narendra Modi touched down in Buenos Aires for the G20 Summit on Thursday.

Cronica TV aired an image of Apu Nahasapeemapetilon alongside a footage of PM Modi landing for the G20 Summit. The caption underneath read, "Llego Apu," which in Spanish means, "Apu arrives". For the background music, the TV reportedly decided to use the song "Ring Ring Ringa" from the movie Slumdog Millionaire.

The character of "Apu" has been in controversy for "racial stereotyping". Comedian Hari Kondabolu criticized Apu as a negative stereotype of South Asians, and made a documentary - "The Problem with Apu." In the film, Mr Kondabolu interviewed actors from South Asia about the perception of South Asians in American culture and how the character of Apu impacted their lives.

The comedian was among the first ones to tweet. "This couldn't be true, right?" he wrote while sharing a snapshot from the channel.

This couldn't be true, right? https://t.co/xiEzNgpXip

Soon after, reactions started pouring on social media calling the news treatment of PM Modi's arrival in Argentina as "demeaning" and "irresponsible".

This is unacceptable. He is our PM and must be respected on international dais like other dignitaries...

Disgusting. He's representing a billion people there. This is unwarranted. https://t.co/vTxVE1BwL9

It is condemn able https://t.co/NuIAeqITJ7

During the ongoing G20 Summit, which is a grouping of the world's 20 major economies, PM Modi participated in the first-ever trilateral meeting between Japan, America and India and the second Russia, India China (RIC) trilateral. He will return to India on Tuesday.