The Bill, already passed by the Assembly, was put to vote by Deputy Chairman of the council MK Pranesh. 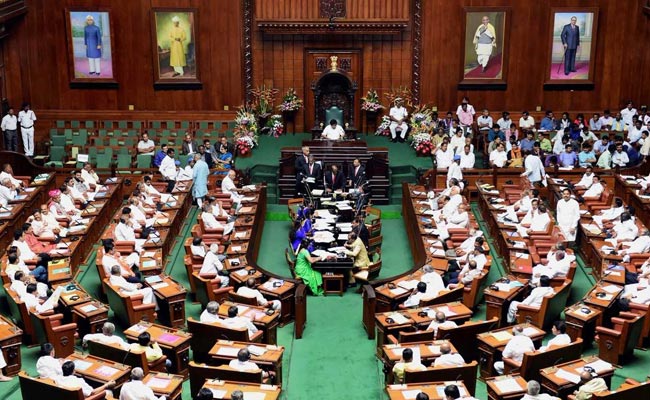 The House was adjourned for Tuesday. (Representational)

The anti-cow slaughter Bill was passed in the Karnataka Legislative Council by a voice-vote on Monday amid protest by the Congress party and JD(S).

The Bill, already passed by the Assembly, was put to vote by Deputy Chairman of the council MK Pranesh.

JD(S) MLCs trooped into the well of the House and some of them tore the copies of the Bill and threw them near the Chair.

Despite this, the Deputy Chairman announced that the Bill has been passed. The BJP members thumped the desk and expressed happiness.

Later, the House was adjourned for Tuesday.

During the discussion, several Congress and JD(S) MLCs termed the Bill as anti-farmers, said it was targeting certain sections of people and demanded that it be withdrawn or be referred to the joint select committee for vetting.

Expressing happiness over the passage of the Bill, Mr Chauhan said there were more than 75 domestic breeds of cattle but now there were only 35 breeds for want of conservation.

With the Act coming into effect, the efforts for conservation would gain strength, he said.

The government had, on January5, promulgated the anti-cow slaughter ordinance that provides for punishment for killing of cattle and offers protection to those acting in good faith to save them, as the Bill to this effect was yet to be cleared by the Legislative Council.

According to the Karnataka Prevention of Slaughter and Preservation of Cattle Ordinance-2020, cattle is defined as a cow, calf of a cow, bull and bullock of all ages and he or she buffalo below the age of 13, while beef has been defined as the flesh of the cattle in any form.

For a Bill to become a law, its passage in both Houses followed by assent by the Governor is necessary.

However, as the Council was adjourned sine die even before the Bill was tabled there for passage during the winter session, the government opted for the ordinance route.