Farmers from 23 districts across Maharashtra have joined the march, flagged off from Nashik on Wednesday to mark the fourth death anniversary of Communist ideologue Govind Pansare. 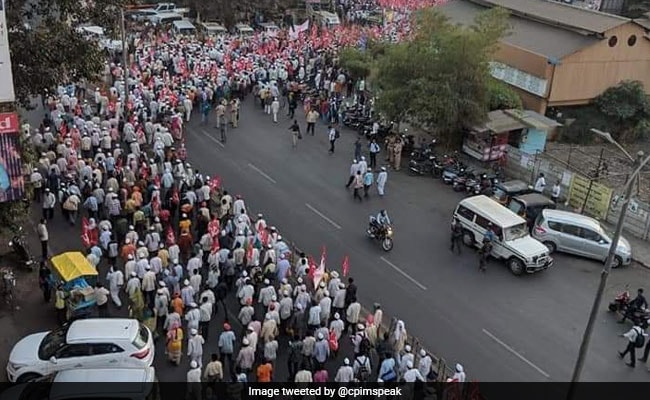 The protesting farmers will take nine days marching from Nashik to Mumbai.

Over 50,000 farmers on Wednesday embarked on a 180-km march from Nashik to Mumbai for the second time in the last 12 months to protest against what they termed as the "betrayal" of peasants by the BJP governments at the state and centre. The Kisan Long March-2 -- expected to take over nine days to complete -- is being organised by the CPI(M)'s All India Kisan Sabha (AIKS).

Farmers from 23 districts across Maharashtra have joined the march, flagged off from Nashik on Wednesday to mark the fourth death anniversary of Communist ideologue Govind Pansare. It will end at Mumbai on February 27, a day when the country celebrates the 88th death anniversary of freedom fighter Chandrashekhar Azad.

AIKS has accused the Devendra Fadnavis government of not fulfilling the promises it made to farmers after their last movement in March 2018. The farmers are demanding immediate relief in view of the drought-like situation; issues of irrigation; land rights; minimum support price; and a crop insurance scheme.

"A year has passed, but the state government is yet to fulfil its promises. Hence, the long march is being taken out to protest the betrayal of farmers by the BJP-led state and central governments," AIKS member Ajit Navale said.

Meanwhile, organisers of the Kisan Long March-2 accused the government of trying to "crush" the peaceful march through force. "For several hours, police kept detaining groups of farmers coming to join the procession without assigning any reason. Cases are being lodged against our office-bearers," AIKS spokesperson PS Prasad told IANS.

Police, however, denied the allegation. "We are just taking their names and addresses for formality's sake," said Thane Additional Superintendent of Police Sanjay Patil.

Around 35,000 farmers had undertaken a gruelling march from Nashik to Mumbai last March, and it was called off only after the Maharashtra government "accepted" a majority of their demands. They now claim that none of those promises were eventually fulfilled.