Sukhbir Badal also alleged that it was not the first time Mohammad Mustafa had vitiated the atmosphere in Malerkotla. 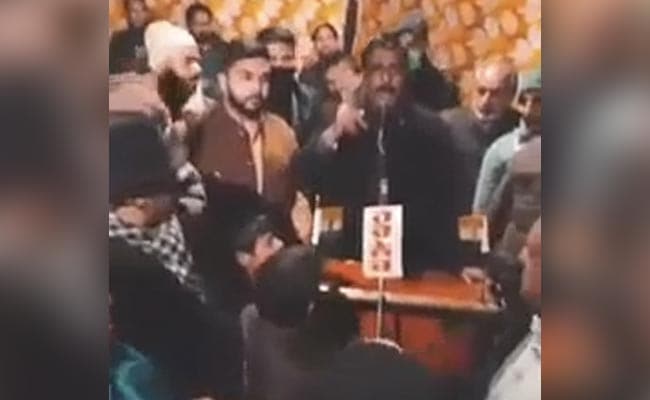 Addressing media at Malerkotla in favour of party candidate Nusrat Iqram Khan, the SAD President also urged the Election Commission to take note of the development and order the immediate arrest of Mustafa.

"This is much needed to restore the confidence of the people in the democratic set-up which has been vitiated by the officer who is the husband of Malerkotla MLA and Congress minister Razia Sultana."

Mr Badal also alleged that it was not the first time Mohammad Mustafa had vitiated the atmosphere in Malerkotla.

"He is known to have registered hundreds of false cases against Akali workers. He has also oppressed the poor and downtrodden and created a fear psychosis in the minds of the people."

Mr Badal assured the people that the SAD knows how to handle such persons. "Mustafa will be proceeded against as per the law and will be held accountable for his misdeeds once the next SAD- BSP government is formed in the state."

Meanwhile, Mohammad Mustafa said hat his statement in Malerkotla, which allegedly disturbed communal peace, is being misinterpreted and the word he used, Fitno, means rowdy. "I was not doing any jalsa there, no one was giving a speech. It's an outburst. There is no case of Hindus, Muslims here; the area is Muslim dominated and both the Aam Aadmi Party and the BJP have fielded Muslim candidates here. The word 'fitno' in my statement is being misinterpreted. No one verified it. Fitno means rowdy," he said.

Mr Badal, who was accompanied by party district president Iqbal Singh Jhundan and senior leader Mohammad Owaisi, also assured to develop Malerkotla as a tourism destination by building on its heritage stature. He also announced a medical college would be established in the district as well as separate colleges for boys and girls.

In another press conference at Dhuri, the SAD President slammed the Aam Aadmi Party (AAP) and said that they told Punjabis that they would give tickets to ordinary persons but had instead sold its tickets to the highest bidders.

He alleged that the AAP ticket had been sold in Mohali to property developer Kulwant Singh.

"Similarly around 50 other tickets have been sold, mainly to people with criminal records. One of them includes a former Akali Amit Rattan who was thrown out of the SAD after people complained that he had duped them on the pretext of doubling their money".

Mr Badal also lauded the services of Prakash Chand Garg to the people at large and announced that once the SAD-BSP government was formed, the senior leader would be inducted as a minister with an important portfolio.

Speaking about AAP leader Bhagwant Mann, the SAD President said the latter was never given any recognition in the party.

"For one year Arvind Kejriwal kept telling Punjabis he was looking for the right face while sitting alongside Mann. Even now when Mann has been announced as the party's chief ministerial candidate, posters across Punjab are still demanding a chance for Kejriwal. This itself proves that Mann is only a dummy candidate".

Mr Badal also lashed out at Bhagwant Mann for showing disrespect to the Sikh religion as well as his own mother. He said Mann had been publically denounced for being drunk in the presence of Sri Guru Granth Sahib ji.

He said Mann had also sworn a false oath in the name of his mother that he would leave liquor but was found in an inebriated condition soon after. "Such an irresponsible person can never be trusted by Punjabis", he added.