Akal Takht Chief Calls For Ban On RSS, Says It's Out To "Divide" India

The Akal Takht, translated as "Throne of the Timeless One", is the highest temporal seat of the Sikh community. 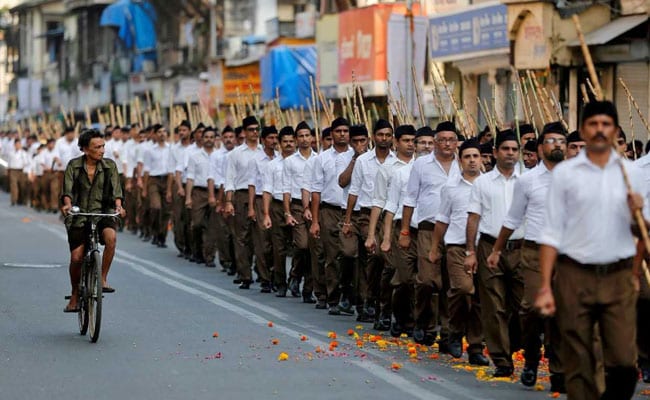 The Sikh religious leadership has condemned the RSS for making controversial statements.

The chief of the top Sikh body - Akal Takht - called for a ban on the Rashtriya Swayamsevak Sangh (RSS) on Monday, saying that allowing it to operate freely would only "divide" the nation. The RSS is the ideological mentor of the BJP which rules the centre.

"Yes, it should be banned. I believe what the RSS is doing will create divisions in the country. The statements being made by RSS leaders are not in the country's interests," Akal Takht chief Giani Harpreet Singh said during a media interaction in Amritsar, calling upon the centre to rein in the outfit.

When pointed out that the RSS was linked to the BJP, Giani Harpreet Singh said: "Then it is not in the country's interests. It will hurt the country and destroy it."

The Akal Takht, translated as "Throne of the Timeless One", is the highest temporal seat of the Sikh community. Located in Amritsar, it is part of a complex of religious buildings centred on the Golden Temple.

However, this is not the first time that religious leaders of the Sikh community and the RSS have faced off on ideological grounds. Last week, Shiromani Gurdwara Parbandhak Committee (SGPC) president Gobind Singh Longowal objected to RSS chief Mohan Bhagwat calling India a "Hindu Rashtra" during an event held to mark the Dussehra festivities.

"The SGPC chief has objected to a statement made by RSS chief Mohan Bhagwat on the occasion of Dussehra, wherein he said that all the people residing in India are Hindu because the country is a Hindu nation," a press release issued by the committee last Wednesday read.

The SGPC, also known as the Sikh parliament, manages all the gurdwaras and religious issues related to the community. Its office-bearers are voted in by the Sikh electorate.