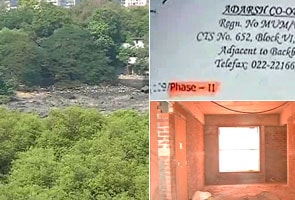 Mumbai: The Adarsh Housing scam has made the national headlines and cost a Chief Minister his job. The Army is investigating the role of some of its senior-most officers.

Now, it seems that this scam was part of a much more elaborate plot. NDTV has learnt that the promoters of the Adarsh Housing Society were also gunning for another prime piece of defence land in South Mumbai worth crores. Under the scanner now is a 7000 square metres of sea facing land in South Mumbai. Documents with NDTV show that while Adharsh was being built, members of that society prosposed an Adarsh II here, in 2007, to the then Revenue Minister Narayan Rane.

Just as land for Adarsh in Colaba had been acquired on citing Kargil widows, heroes and war veterans, Adarsh II was proposed as low-cost housing for servicemen and the poor.

In both cases, the lands fell in the Coastal Regulation Zone. In fact the Adarsh II plot,during high tide, goes under water. While Adarsh Housing Society totally bypassed environmental clearances the Adarsh II claimed that the Urban Development department had strongly advocated development of this land- a claim not backed by documents

In 2008, another proposal, with covert links to the Adarsh Society, was floated - the Rakshak Cooperative Housing for servicemen and ex-servicemen. This proposal came with a detailed survey map of vital defence properties in South Mumbai. The map was prepared by the architect of Adarsh Society based on information that is, otherwise, highly confidential.

Sources tell NDTV this map is proof that Adarsh Society had detailed information of each piece of defence land that could be potentially grabbed.

When contacted the Adarsh Society promoters refused to the answer queries on these projects, but documents indicate an elaborate land grab scheme that could now come under the scanner.
Comments
Adarsh Housing SocietyAdarsh scamAshok Chavan