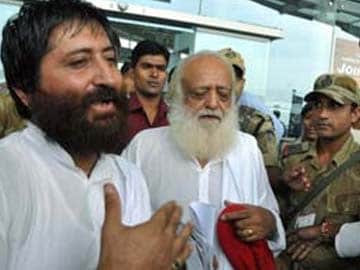 Surat: Two unidentified men threw acid at an aide of one of the witnesses in the rape case against self-styled godman Asaram Bapu in Surat on Sunday.

"The victim has been identified as Dinesh Bhavchandani (39) who has given a statement against Asaram in the case," said the officer.

"The incident took place when Bhavchandani was riding to his house near Vesu Royal Residency. Two men on a bike overtook him and threw acid," she said.

He was taken to a private hospital.

Earlier, two witnesses in cases of rape against Asaram and his son Narayan Sai have been attacked.

Promoted
Listen to the latest songs, only on JioSaavn.com
A Surat-based woman has accused Asaram of repeated rapes and illegal confinement between 1997 and 2006 when she was living at his ashram on the outskirts of Ahmedabad. Her younger sister has lodged a similar complaint against Narayan Sai.

Asaram (72) is currently in a Jodhpur jail after being arrested in September 2013 for sexually assaulting a minor girl at his ashram there.