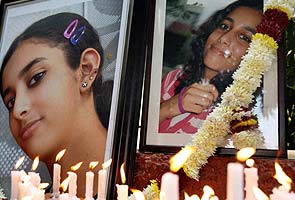 Ghaziabad: The CBI today said that dentist Rajesh Talwar had found his daughter and his domestic help in "objectionable position" and killed them using his golf stick and a sharp-edged weapon.

Deposing during cross-examination in a special court in Ghaziabad, CBI Additional SP AGL Kaul, who led the second probe team, spoke of the motive behind the sensational double murder of 14-year old Aarushi and Hemraj at the Noida residence of dentist couple Rajesh and Nupur Talwar on the intervening night of May 15-16, 2008.

SP Kaul said according to his investigation Rajesh Talwar was awake in his room at 12 midnight. The time of murders, according to the post-mortem report, is between 12-1 AM.

The officer claimed that according to his probe Hemraj was attacked in Aarushi's room on her bed, taken to the roof, and dragged to a corner where his throat was slit.

Explaining the sequence of events which took place on the fateful night, SP Kaul said Rajesh heard some noise and went to Hemraj's room but did not find him there.

"There were two golf sticks lying in Hemraj's room one of which Rajesh Talwar picked up. He heard a noise from Aarushi's room. The door of the room was not locked and was just shut. He opened the door and found Aarushi and Hemraj in objectionable position on Aarushi's bed," SP Kaul said in his testimony.

Rajesh Talwar hit on Hemraj's head with a golf stick. When he struck again, Hemraj moved his head and the stick hit Aarushi on her forehead.

He said when golf sticks were seized, their heads were not sealed separately.

"The V or U shaped injury on Aarushi's forehead could have been caused by the use of golf stick head," he said.

The officer said the noise generated in the process woke Nupur Talwar who rushed to Aarushi's room.

"By that time the injured Hemraj had fallen from the bed. Both checked Aarushi's pulse and found her near-dead which scared them and they decided to kill Hemraj so no one discovers the incident," SP Kaul said before the court.

He said, the husband and wife decided to hide Hemraj's body and dispose it when they had an opportunity to do so.

The duo wrapped Hemraj's body in a bed-sheet and dragged him to terrace where they slit his throat, covering the body with a cooler panel, SP Kaul said.

He said after coming to the room, they dressed up the crime scene by arranging the bedsheet and toys.

They slit Aarushi's throat, to ensure that wounds on Hemraj and their daughter looked similar, and Nupur cleaned Aarushi's private parts, he said.

Giving details of his findings, the officer said the dentist couple cleaned blood stains, disturbed the router, collected all the clothes which were used to clean blood and also the small sharp edged weapon used in the killing with an intention to dispose them off.

Both waited for their maid Bharti to come while Rajesh drank liquor. The officer said once Bharti came, Nupur asked for Hemraj as the wooden door was locked by them from outside.

"She threw the key towards Bharti from balcony, which can be approached from the backside of Aarushi's room. When Bharti came up she found the Talwars crying," he said.

On being questioned by defence about forensic reports that Hemraj's DNA was found from a purple pillow recovered from the residence of Krishna, who was a suspect in the initial probe done by CBI, SP Kaul said that was the result of a typing error in the CFSL report.

Promoted
Listen to the latest songs, only on JioSaavn.com
He said he had written to Director, Centre for DNA Fingerprinting and Diagnostics (CDFD), which conducted DNA test, seeking explanation for the alleged error.

"I had written that I feel that description of purple coloured pillow cover recovered from Krishna's room and pillow recovered from Hemraj were inter-changed," he said.