Farmers Chakka Jam: The three-hour block came into effect at noon and ended at 3 pm.

A thoroughly fortified national capital largely remained peaceful on a day agitating farmers had called for a nationwide chakka jam protest for three hours, even though they did leave Delhi out of it in the first place along with Uttar Pradesh and Uttarakhand. Today's protest came 10 days after the unprecedented violence during a tractor rally that marred India's Republic Day celebrations in Delhi.

The block, called by the Samyukt Kisan Morcha (SKM) demanding the withdrawal of three contentious Central farm laws, is being observed along major national and state highways across the country.

"There will be no road blockade in Uttar Pradesh and Uttarakhand tomorrow; roads will be blocked in rest of the country excluding Delhi. The reason is that they can be called to Delhi any time, so they are kept on standby," Bharatiya Kisan Union leader Rakesh Tikait said. The SKM, however, gave exception only to Delhi; it has said that all protest sites in and around the city are already in chakka jam mode.

Nevertheless, extra security was deployed and barricades strengthened in Delhi. Extensive measures were undertaken particularly at the three key protest sites along its border: Singhu, Tikri, and Ghazipur.

At Ghazipur, even water cannon vehicles were deployed. The Tikri border point was fortified with some 20 layers of hurdles, including barbed wires, concrete blocks, nets. Even the narrowest of roads leading to or from the area was blocked. The Red Fort area, the biggest point of disturbance on Republic Day, also received particular focus.

Around 50,000 police, paramilitary, and reserve forces personnel, along with riot control vehicles, were deployed overall in the Delhi-NCR region while at least 12 metro stations were put on alert, the police have said. Entry into eight such stations has been blocked.

"The arrangements have been strengthened since January 26...Drones have been arranged for an aerial view, CCTV cameras have been installed in sensitive areas," Alok Kumar, Joint Commissioner of police, told ANI. 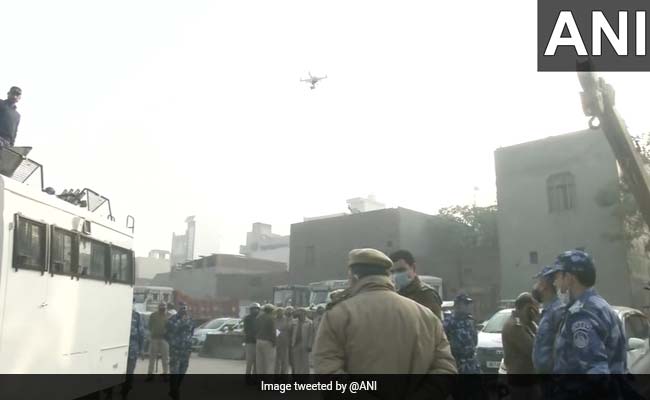 A drone in action in Delhi on the day of the chakka jam.

A little while into the chakka jam, the police removed a crowd that had gathered in support of the protesting farmers, raising slogans and holding up banners, at Shahidi Park in the ITO locality. "Over 60 persons were taken into custody," said Joint Commissioner of Police Narendra Singh Bundela. They were reportedly SFI activists connected to Jawaharlal Nehru University. 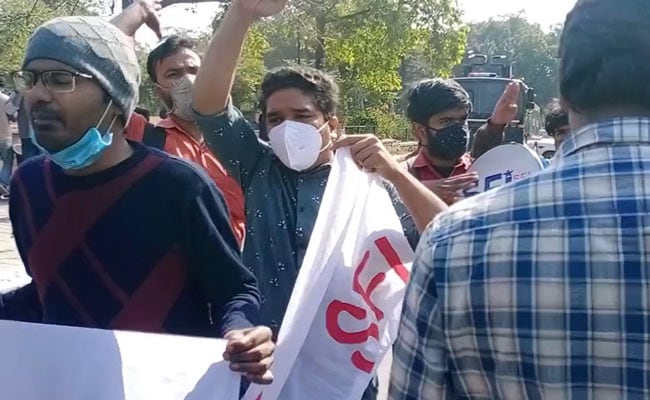 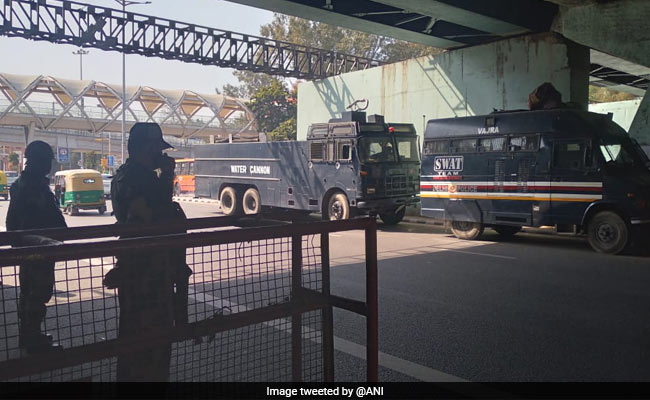 A spot in the ITO locality with a water cannon parked.

The police, on high alert, monitored social media to track rumours and act against those sparking or spreading them. "We are in touch with the police forces of other states also," Delhi police spokesperson Chinmoy Biswal has said. Internet services have been shut down in the three key protest areas. 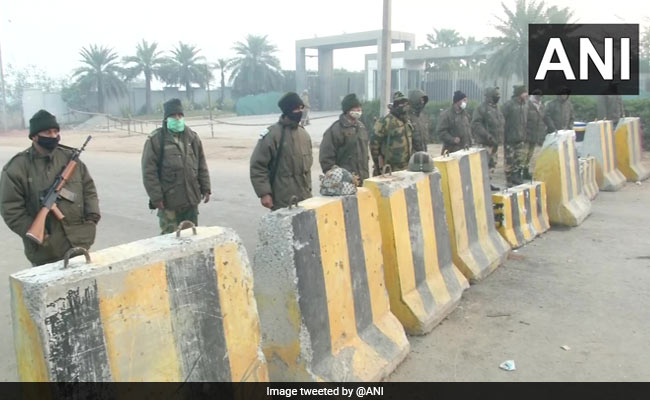 Referring to such measures, Congress leader Priyanka Gandhi tweeted in Hindi asking, "Why are you threatening with the wall of fear?"

Thousands of farmers, mostly from Punjab, Haryana, and Uttar Pradesh have been camping around these three border points for over 70 days, demanding the repeal of the laws passed by Parliament in September 2020. The laws are the Farmers' Produce Trade and Commerce (Promotion and Facilitation) Act, 2020, the Farmers (Empowerment and Protection) Agreement on Price Assurance and Farm Services Act, 2020, and the Essential Commodities (Amendment) Act, 2020.

The United Nations called for maximum restraint from authorities in the wake of the farmers' protest.

#India: We call on the authorities and protesters to exercise maximum restraint in ongoing #FarmersProtests. The rights to peaceful assembly & expression should be protected both offline & online. It's crucial to find equitable solutions with due respect to #HumanRights for all.