More than a thousand Dalits participated in the event in Saurashtra, where cow vigilantes allegedly flogged seven Dalits for skinning a cow's carcass 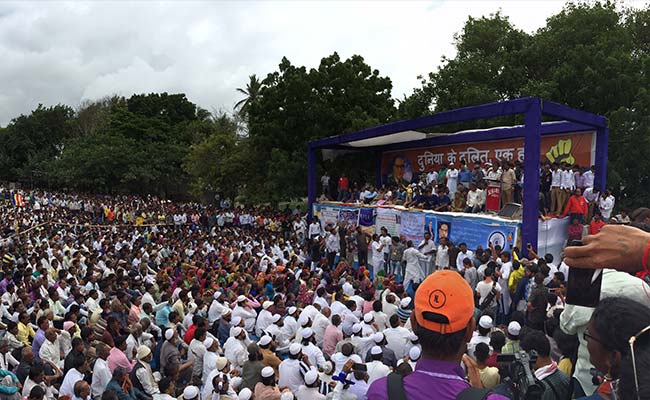 Nearly 10,000 people protested against the attack on Dalits in Gujarat in 2016 (File Photo)

Ahmedabad: A Dalit family, whose four members were allegedly flogged by cow vigilantes in Una tehsil in Gujarat's Gir Somnath district in 2016, embraced Buddhism on Sunday at an event organised in Mota Samadhiyala village.

The organiser of the programme claimed that a total of 450 Dalits embraced Buddhism on the occasion.

More than a thousand Dalits participated in the event in Saurashtra region, where cow vigilantes had allegedly flogged seven Dalits for skinning the carcass of a cow in July 2016.

Among the new converts were Balubhai Sarvaiya, his sons Ramesh and Vashram, who were victims of the flogging, and Balubhai's wife Kunwar Sarvaiya.

Balubhai's nephew Ashok Sarvaiya, and another relative Bechar Sarvaiya, who also were the victims of flogging, also shunned Hinduism on the eve of Buddha Purnima - the birthday of Lord Buddha.

Another victim of flogging, Devjibhai Babariya, who hails from nearby Bediya village, could not attend the function due to poor health, Balubhai said.

"A total of 450 Dalits converted to Buddhism today," said Balubhai, who had organised the event.

The new converts were handed certificates by the Buddhist Society of India.

Seven Dalits, including four members of the Sarvaiya family from Mota Samadhiyala, were paraded and flogged for allegedly skinning a dead cow in July, 2016. The incident had caused nationwide outrage after its video had gone viral.

Ramesh Sarvaiya said they decided to convert to Buddhism because they were discriminated against by Hindus over their caste.

"Hindu cow vigilantes called us Muslims. The kind of discrimination we faced by Hindus pains us and therefore we have decided to convert. Even the state government has discriminated against us by not fulfilling the promises made to us in the wake of the flogging incident," he said.

Ramesh Sarvaiya said they were never considered Hindus despite the fact that their community followed the religion for "thousands of years".

Promoted
Listen to the latest songs, only on JioSaavn.com
"We were prevented from entering temples. We are discriminated against by Hindus and had been asked to carry our utensils for food wherever we go to work. The fact that we have not yet got justice in the Una case has also been a reason behind our decision to convert," he said.