20 Killed in Manipur Landslide After Heavy Rain; Floods in Bengal, Odisha, Mizoram Too 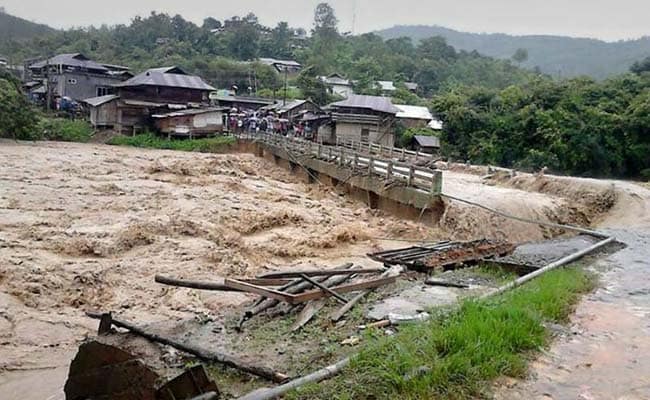 Crucial bridges in Chandel have been damaged, which is hampering rescue operations.

Chandel District, Manipur: A day after 20 people died in a landslide caused by heavy rain in the Joumol village in Manipur's Chandel district, rescue teams are still having a tough time in reaching the spot.

"Rescue teams are being sent to Juomol at the earliest and will reach sometime today because of heavy rains and landslides. The government is trying to mount relief operations as effectively as possible," Chandel lawmaker Victor Nunghlung told NDTV.

What is also hampering rescue operations in the area is the damage to crucial bridges in Chandel, including one that connects Chandel town to the Juomol village. The Manipur government says the only other route to the village is through Myanmar. This morning, choppers were spotted by local residents in the area, suggesting that the government is trying to mount air rescue and relief operations.

The state has been witnessing incessant rain over the last few days which has washed away bridges and national highways besides rendering thousands of people homeless. Low-lying areas in capital Imphal and its outskirts have been inundated.

The districts of Thoubal and Chandel are the worst affected. "The water first came in on July 28. 100 houses have been destroyed in this village. 2500 bighas of agricultural land is under water. Some relief has been given by the government but it is not enough," said Siraj Ahmed, resident of a village in Thoubal district that's seen heavy flooding.

Several rivers are flowing above the danger mark and the residents have been moved to relief camps set up with the help of local MLAs.

Heavy rain has also flooded parts of West Bengal, Odisha and Mizoram affecting the lives of nearly seven lakh people. Most parts of Bengal's capital Kolkata are submerged since yesterday.

In Odisha, almost five lakh people have taken shelter in relief camps due to incessant rains. In southern Mizoram, about a hundred families have been rendered homeless due to swollen rivers.
Comments
Manipur rainManipur floodManipur landslideChandelManipur