According to the locals, a massive blaze broke out at the Church of God at Qualapatty at around 4 am. 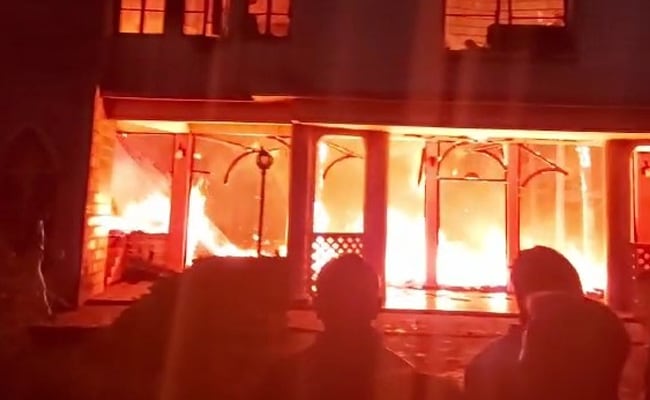 Probe is on to find the cause of the fire, police said.

A massive fire that broke out this morning at a 117-year-old church in Shllong has killed an elderly couple, police said, adding that the century-old church was damaged in the blaze.

The church is surrounded by several houses.

Probe is on to find the cause of the fire, Ms Lyngwa said.

The Church of God - Meghalaya and Assam - was constructed in 1902 at Mylliem, about 20 km away from Shillong. An indigenous church, maintained by local Christians, it is also one of the most prominent Protestant Churches in the area.

The church was also one of the founding members of the comprehensive representative body - the North East India Christian Council (NEICC) in 1937 and takes active part in other ventures of the Bible Society of India, the Evangelical Fellowship of India and Union Christian College, Khwan in Meghalaya.

Rev. JJ M. Nichols Roy (1884-1959) who was one of its pioneers and architect of this indigenous movement, was a staunch nationalist, a freedom fighter and a prominent member of the Constituent Assembly. It was he who authored the Sixth Schedule of the Constitution of India and designed for the integration of the hill areas with India.