Tabbar Review: The eight-episode Punjabi/Hindi series utilizes the conventions of a crime thriller to mount an affecting, acute exploration of calamity, culpability and a clan in crisis. 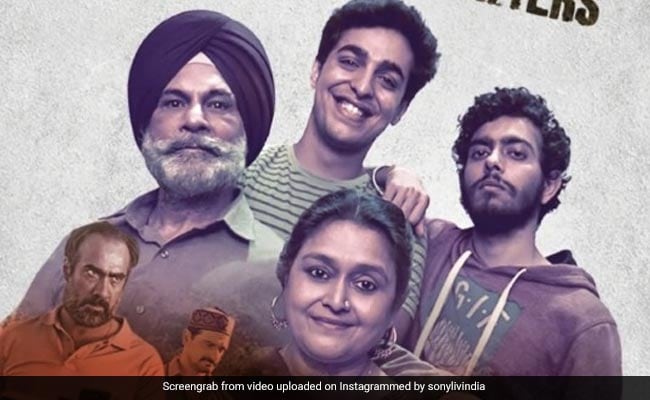 Powered by a performance of astounding acuity by the ever-reliable Pavan Malhotra and anchored in the sensibility of an uncommonly perceptive director, Tabbar is an eight-episode Punjabi/Hindi series that utilizes the conventions of a crime thriller to mount an affecting, acute exploration of calamity, culpability and a clan in crisis. The SonyLIV show is a completely unconventional affair - it hinges more on emotions and psychological inquests than on overtly dramatic action. The riveting tale homes in on a family of four inadvertently sucked into a situation that quickly spirals out of control. As the threats multiply, the patriarch is compelled to make desperate choices that push him, his wife and his two sons into a moral abyss hard to climb out of.

The menace of drugs that Punjab has had to contend with in recent years and political skullduggery provide the backdrop but they do not overshadow the essence of the story. What is most striking about Tabbar (Family in Punjabi) is that it uses the mystical poetry of Baba Farid to create an ethical context for the actions of a man desperate to protect his family from harm after an unintended murder puts them all under a cloud. To cover his tracks, the man commits acts that only aggravate matters.

Punjab policeman-turned-convenience store owner Omkar Singh (Malhotra) lives with his wife Sargun (Supriya Pathak Kapur) and two sons, IAS aspirant Harpreet 'Happy' Singh (Gagan Arora) and drifter Tegi (Sahil Mehta) whose ambition is to be a social media star. A night changes everything for the family - they are stuck with the body of an intruder shot dead by Happy in a state of panic and a packet of drugs.

Happy has just arrived from Delhi on a brief break from the coaching institute. Tegi rummages through the latter's duffle bag for a gift that his elder sibling had promised. He fishes out a packet and hides it. Turns out that there has been a mix-up and the bag isn't Happy's. Its real owner comes calling. One thing leads to another and the aggressive visitor loses his life.

The dead man is the only brother of a politically ambitious crime lord, Ajeet Sodhi (Ranveer Shorey), whose henchmen fan out to look for the missing boy. For Omkar and his family, safety lies in not only getting rid of the corpse but also ensuring that anybody in the neighbourhood who has the slightest inkling of what might have transpired in their home that night, is silenced.

Among them is the man's own nephew, Lakhvinder 'Lucky' Singh (Paramveer Singh Cheema), an enterprising policeman charged with locating the man who has gone missing. Lucky and Happy have been more buddies than cousins since their school days.

Happy hopes to marry a girl in the neighbourhood, Palak (Nupur Nagpal), but there is an impediment here too. Palak's mother has Lucky in her sights as a match for her. The love triangle is only a sideshow in a story where matters of the heart are eclipsed by far more pressing moral questions.

In one of the early episodes of Tabbar, Sargun asserts that nothing will ever be right again for her and her dear ones. In the last chapter, Omkar intones: "Sab theek ho gaya (Everything is all right)." The irony is difficult to miss. Omkar knows full well that he has lost control over his own story and everything has gone haywire. So, there is another shocking plan up his sleeves.

Fate, despair, guilt, contrition, madness - Tabbar weaves a multiplicity of themes around its central concern - a family in duress. Omkar is a devoted family man. He is a husband who is deeply in love with his wife whose frail health cut short his police career.

He is a committed father to boot, determined to help his indecisive sons along as they struggle to figure out what their future holds. But he is a man whose desire to save his family gets the better of him and pushes him into monumental indiscretions.

Tabbar has a pronounced moral compass within which Omkar Singh's actions are located. His transgressions are both inevitable and compulsive, but unlike the supposedly cool shenanigans of Georgekutty in the Malayalam hit Drishyam, Omkar's repeated violation of the law isn't glorified and bestowed with heroism. Even if there is a faint hope of escape, it is only a hope and only a faint one at that.

Tabbar is principally the story of two families - one of them, Omkar's, is intact but with dark clouds hovering over them; the other, Ajeet Sodhi's, is severely depleted. His brother is the only family that the latter had had for years. He is surrounded by men who he barks orders to but rarely trusts. While Omkar's family grapples with a predicament whose end isn't in sight, Sodhi confronts his bereavement in the only manner he is capable of - he cloaks his grief in fury.

Working with a script written by Harman Wadala and aided by a mood-setting background score by Sneha Khanwalkar, director Ajitpal Singh elevates Tabbar well above the limitations of the genre and delivers moments of fine-tuned sublimity that hit home with force, combining the pain, perseverance and pathos of a man's struggle to hold his life together.

For the central character, Pavan Malhotra is the perfect fit. A consummate actor who never misses a trick, he instinctively merges with the spirit of Omkar Singh, a conflicted but aware man sinking steadily into a quagmire.

Malhotra proved his mettle very early in his career in non-mainstream films such as Buddhadeb Dasgupta's Bagh Bahadur and Saeed Akhtar Mirza's Salim Langde Pe Mat Ro. Commercial Hindi cinema saw little value in his subtle skills. Tabbar gives him the sort of role that he has deserved all along. He grabs the opportunity with both hands and, with the minimum of fuss, comes up with an absolute stunner.

Malhotra is supported to the hilt by another screen performer who we are accustomed to seeing outstanding work from - Supriya Pathak Kapur. It is her character who lends Tabbar a certain spiritual depth. With little apparent effort, she brings out the multiple moorings of the woman's mental make-up and adds a dimension to the series that helps it skirt around the pitfalls of predictability. Unusually subdued but unfailingly bracing, Tabbar is a show that neither looks nor feels like conventional fare. In creating something new and introspective, it pushes the boundaries of the crime thriller and makes the exercise count for far more than the genre conventionally encompasses. Tabbar is unmissable.