Rocketman Movie Review: Taron Egerton as Elton John is incredibly good at hitting the right notes both musically and performatively. 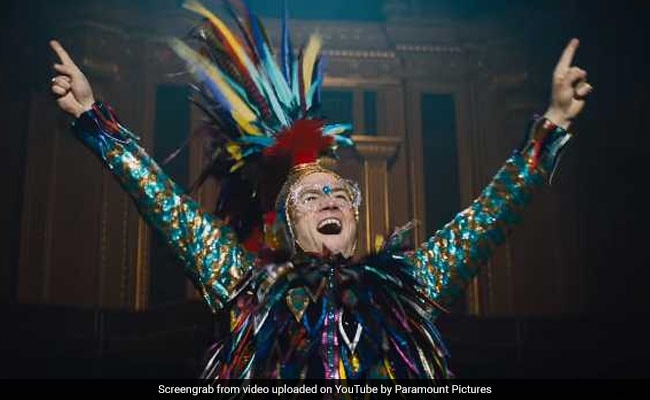 Rocketman premiered out of competition in the 72nd Cannes Film Festival.

Elton John's musical genius as well as the emotional frailties that nearly drove him over the edge in the 1970s are on full show in Dexter Fletcher's larger-than-life Rocketman (titled after the rocker's 1972 hit). Unfortunately, the songs and the surface glitz, necessary as they are, are given precedence over insights into the inner workings of the pop icon's mind and heart. So, even as the film is every bit as flashy and ebullient as the man it celebrates, it falls disappointingly short - certainly to a far greater extent than last year's Bohemian Rhapsody did - of being a rounded portrait of a life and a career.

Taron Egerton (of Kingsman fame) plunges headlong into the role of the protagonist in a film that is markedly more free-flowing and impressionistic than the Freddie Mercury biopic. But neither his vibrant performance nor his impressive vocals can compensate for the facile nature of a screenplay designed to present John as a great survivor-hero who took the somewhat smooth with the very, very rough and lived to tell the tale.

Rocketman, a pastiche of dramatic moments and musical set pieces, focuses primarily on the early period of Elton John's life. It dwells fleetingly on the formative influences and the early successes that paved the way forward for the mercurial musician. But more than an intensely realistic character study, it is an exuberant, colourful tribute to a phenomenal music career that has weathered many storms, one of them leading to a near-catastrophic plunge into drug and alcoholic addiction, which is the central conflict point of the film.

Fletcher reimagines the Elton John songs, which aren't played in a chronological order, and employs them for the purpose of delivering grand Bob Fosse-style set pieces, a few of which are undeniably rousing and entertaining. Inevitably, Rocketman ends on an 'I'm Still Standing' note, with the song belted out by Egerton and then merging into the video that was shot decades ago in Cannes, justifying the film's splashy world premiere in Grand Theatre Lumiere.

The preponderance of outrageous costumes (of course, every one of them drawn from real-life concerts) and the overt emphasis on the glittery outer packaging leaves a huge hole at the heart of the story. But Egerton is so incredibly good at hitting the right notes both musically and performatively that the film breezes past the hurdles and stays on its chosen course - it is more a to-hell-and-back story than a making-of- a-superstar saga. While the former element is essential to the narrative, a little more of the latter might have pumped some more life into the movie.

Elton John is one of the executive producers of the film, so it isn't difficult to see why this supposedly warts-and-all cinematic account of his life does not come across as a no-holds-barred show. Ironically, the coarse language, gay love scenes, hard-drinking and cocaine-snorting place Rocketman out of bounds for younger audiences who might have more readily warmed up to the sweeping melodrama complete with the in-your-face sartorial excesses and behavioural quirks that define Elton John.

He is told that he must "kill the man you were born to be to become the man you want to be". John takes the advice seriously, but his struggle to be to be the man he wants to be takes its toll. The songs are strung together in a way that is meant to take this theme of a man fighting to assert his identity and channel his talent is the crux of the film but often gets lost in the din the film generates.

Rocketman, directed by the man who completed Bohemian Rhapsody after Bryan Singer's departure from the project, opens at the point where John has gone too far down the path of self-destruction and is in need of rehab. Attired in a flaming orange sequined robe and devil horns, he emerges out of a backlit door and strides up the corridor of the clinic. The swag is celebratory rather than indicative in any way of the troubles the star has brought upon himself.

Cut to a de-addiction meeting. "I am Elton Hercules John," the protagonist intones and wastes no time to confess to his many uncontrolled transgressions, rattling off a list of his addictions - alcohol, cocaine, weed, prescription drugs, bulimia, shopping. He then proceeds to enlighten the small gathering about the reasons behind his descent into this state.

Told through flashbacks, the story takes us back to his origins as a London piano prodigy, born Reginald Dwight, who had to contend with a cold, distant father (Steven Macintosh) and grapple with frequent emotional tussles with his mother (played with gusto by Bryce Dallas Howard), who, when she learns that her son is a homosexual, nonchalantly warns him that he will never find real love.

That prognosis haunts John and impacts his relationships with his manager and lover John Reid (Richard Madden), the woman that he is married to briefly, Renate Blauel (Celined Schoenmaker) and pretty much everyone else that he interacts with. The one equation that escapes the malign influence of the demons in his mind is the partnership he forges with Bernie Taupin (Jamie Bell), the writer of the lyrics that he set to music.

The duo is one of the most successful combos the music industry has ever seen - the film harps upon the fact that two men - Bernie, on more than one occasion tells Elton that he is a brother - have never had an argument over the 50 years that they have worked together. The placid John-Taupin partnership has yielded many riches over the decades. The control that everyone behind and in front the camera is of this film does not quite translate into the same level of rewards.