"For the film Mughal-E-Azam aficionados," tweeted Rishi Kapoor while sharing the photo from the film's sets 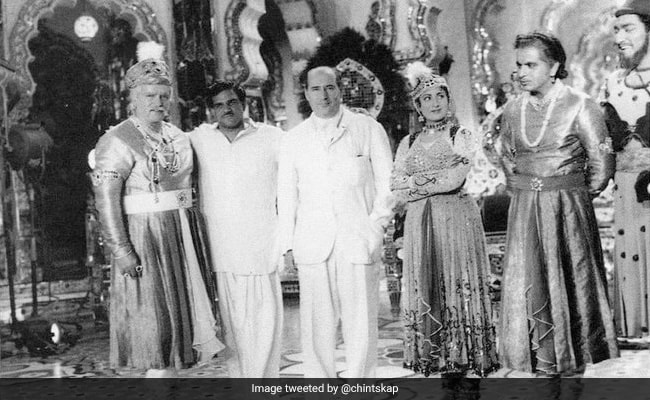 Is there anything called a throwback Tuesday? Looks like there is because Rishi Kapoor just treated movie buffs with a delightful surprise. Sharing a priceless photo from the sets of 1960 film Mughal-E-Azam, Rishi Kapoor began his tweet by saying: "For the film Mughal-E-Azam aficionados." The black and white photo, which appears to be clicked inside the Sheesh Mahal that was created for the movie at Mumbai's once-iconic Mohan Studio. Director K Asif can be seen posing with Prithviraj Kapoor (who was cast as Akbar), Madhubala (needless to say she played Anarkali), Dilip Kumar (Saleem) and Murad (Raja Man Singh) along with a special guest - acclaimed Italian filmmaker Roberto Rossellini. Rishi Kapoor summed up the photo in basically one word "rare": "A rare off the shoot picture with the acclaimed Italian director Roberto Rossellini with Mr K Asif and his actors."

Roberto Rossellini visited India sometime in the Fifties and was reportedly taken to the sets of Mughal-E-Azam by legendary artist MF Husain, who accompanied Roberto Rossellini on his travels across India. Take a look at Rishi Kapoor's tweet here:

For the film "Mughal-e-Azam" aficionados. A rare off the shoot picture with the acclaimed Italian director Roberto Rossellini with Mr. K. Asif and his actors. pic.twitter.com/LmWWIx6IYz

Rishi Kapoor often shares blasts from the past on social media. Like the time when he posted a photo of a teenaged version of himself with the stunt-man who was Raj Kapoor's body double in Mera Naam Joker.

"Mera Naam Joker"released on December 18th,1970 at the Novelty Cinema in Mumbai. Here as a teen ager,with the "acrobat duplicate"Clown of dad at its premier. Forgot his name. Just spoke Russian. If you seeing this comrade -"Spaciba bolshoi tavarish" pic.twitter.com/UKGgvxhTpI

This too counts as throwback, doesn't it? From Christmas many moons age:

In September last year, Rishi Kapoor returned to Mumbai after spending almost a year in New York for his cancer treatment. Rishi Kapoor's crime thriller The Body released after his return to India.