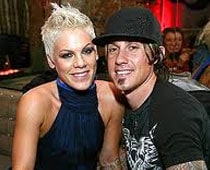 London: Pop star Pink has confirmed thatshe is pregnant with her first child but she was "nervous"about going public with the news due to her recentmiscarriage.

The So What hitmaker sparked rumours that she wasexpecting a baby with her husband, motorcross star Carey Hart,after she was recently spotted with a rounded belly,Contactmusic reported.

The 31-year-old star is enjoying the early stages ofpregnancy and joked that she is looking healthy as herappetite has increased.

"I'm glowing because I'm eating for two these days. Ididn't want to talk about it because I was just really nervousand I have had a miscarriage before, but if I was going totalk about it with anyone, it was going to be with you," shesaid during an appearance on the Ellen DeGeneres Show.

The American singer and her husband longed for a childand planned the baby, with Pink adding, "I worked for it. Itwas not an 'Oops'!"

Pink who isn't keen to know the sex of her unbornchild fears that if it's a girl she will be an unruly daughterjust like her but is eagerly looking forward to motherhood.

Promoted
Listen to the latest songs, only on JioSaavn.com
"The doctor kind of told me what she thinks. I'mterrified because she thinks it's a girl... My mom has alwayswished me a daughter just like me. I'm terrified one of uswill go to jail."

"I never had anything in my life that I didn't workhard for and my relationship is that. We worked really hardand we had our little meltdowns, a couple of them, and weboth needed to do that and come back together. It's justyummy," she added.