Parasite Movie Review: Bong Joon-ho's Film Has The Force Of A Windstorm

Parasite Movie Review: Bong Joon-ho approaches the theme of deprivation and greed with bared claws, scratching away one layer at a time. 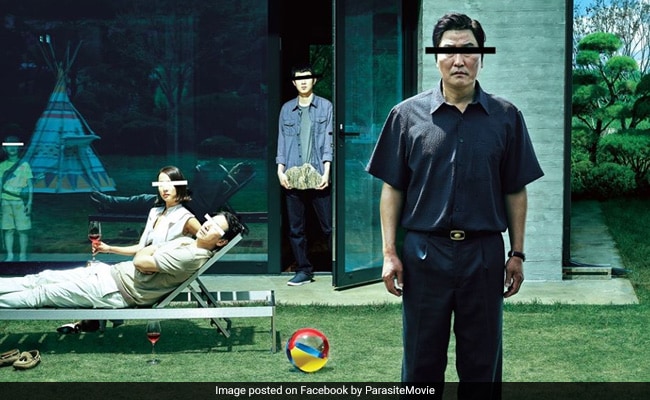 Parasite Movie Review: A poster of the film (Courtesy ParasiteMovie)

It is tough living in the dumps. All you have when you are scrounging for crumbs are your wiles. In Parasite, the jobless, middle-aged Kim Ki-taek (Song Kang-ho in his fourth outing with director Bong Joon-ho) and his hapless family grab their chances when one of them finds a toehold in the sprawling mansion of a moneyed man, Park Dong-ik (Lee Sun-kyun, regular Hong Sang-soo collaborator). And then there is no stopping runaway avarice from getting the better of them.

The fallout of socio-economic disparities that pit one class of people against another has rarely been put on the big screen with the kind of savage candour and devastating intensity that Bong brings into play in his darkly comic, stupefying drama. He approaches the theme of deprivation and greed with bared claws, scratching away one layer at a time to craft a shocking portrait of debasement and opportunism fuelled by a family's desperate measures to ward off poverty.

Parasite tells a universal tale that is situated in a specific cultural milieu and invested with such freshness and flair that it is never in danger of being lost in translation. Its formal rigour is frequently offset by stabs at dramatic exuberance. Each tonal shift is adumbrated with astounding acuity and a keen sense of its effect on the progression of the story and, just as importantly, on the eventual takeaways for the audience.

Parasite is at once a sharp scalpel and a massive wrecking ball. The former pierces the core of a neatly ordered world where it seems money can buy everything; the latter hammers away at the hollowness and complacency at the heart of the life of the Parks, which makes them vulnerable to manipulation and subterfuge.

Parasite goes back and forth between the vividly playful to the profoundly disquieting without for once losing its balance. It springs from a blend of phenomenal writing (by Bong and Han Jin-won), meticulous production design (Lee Ha-jun) and masterly cinematography (Hong Kyung-pyo, coming off Bong's Snowpiercer and Na Hong-jin's The Wailing).

The screenplay, which turns increasingly dark and harrowing as the fissures erupt and spread, is like a gradually twisting screw that tightens its hypnotic grip on the audience as it traverses from a squalid semi-basement home in a low-income district of Seoul to a manicured garden in the backyard of a ritzy mansion, where an explosion of grisly violence blows away the veneer of civility that cloaks the stylish living space designed by an architect for himself but which is now the home of the affluent Park family.

Bong renders the class divide in a manner that is as cinematically rousing as it is emotionally intriguing. The film achieves staggering geometrical exactitude, employing its material and spatial dimensions and details to reflect the yawning chasm that separates the propertied from the penurious. The action unfolds in real neighbourhoods of Seoul, but it does not matter which city this is. It could be any urban expanse not just in Korea but anywhere in the world.

It isn't just the effect of wealth, poverty and greed on human lives that Parasite depicts. Rain, the sky, sunshine, smell, urban decay and architectural ostentation are all vital components of the plot. They serve to draw attention to two different levels of existence at two different ends of the city.

The cramped semi-basement home of Kim Ki-taek and his family is infested with stink bugs. We do not see one, but we do sense the odour. The house, a major part of which is below street level, is damp and fusty. Ki-taek is the sort of man who has never made a success of any business or job. His wife Chung-sook (Chang Hyae-jin) is supportive but just as listless. It is the next generation of the Kims - the 20-something Ki-jeong (Park So-dam) and her brother Ki-woo (Choi Woo-shik) - who want to dig themselves out of the hole they are in.

When someone comes around to fumigate the congested neighbourhood, the family opens the only window through which light and air filter into their dwelling. The foul smell of the bugs, the minimal fenestration and the spraying of the disinfectant, none of which the Kims have any control over, show the audience one side of a larger picture. It is rooted in destitution.

The other side is, of course, located in a part of the city where the well-heeled live without a care in the world, or so it seems when Ki-taek's son, Ki-woo, makes the trek up the perfectly paved incline that leads to the entrance of the residence of the stinking rich Park Dong-ik. The boy is ushered in by the housekeeper and he proceeds to present his forged credentials to Mr. Park's impressionable wife Yeon-gyo (Cho Yeo-jeong). He lands the job of English tutor to her daughter Da-hye (Jeong Ji-so).

But no sooner has Ki-woo infiltrated the mansion with its stairs, spacious rooms and warm lighting, both natural and artificial, than it becomes apparent that the Parks are destined to be sitting ducks in a series of ruses that will enable the four members of the Kim family to worm their way into the household and ensconce themselves there.

It all begins when a friend who is set to leave for school abroad arrives unannounced at the home of the Kims and presents them with a scholar's rock - which is supposed to bring good luck - and an offer for Ki-woo to replace him as Da-hye's private instructor. Ki-woo quickly figures out a way to have his sister, who has a special flair for lying with a straight face, hired as an art therapist for the Parks' hyperactive pre-teen son. The mother complains that the boy is eccentric, easily distracted and hard to control. Ki-jeong tames him in a jiffy. An impressed Mrs. Park is now putty in the hands of the crafty young woman.

Ki-jeong frames the family's incumbent driver in an incident of sexual misdemeanour, paving the way for her father to take over the job of driving Mr. Park's Merc. Finally, another daring scam sees Chung-sook ease out the old housekeeper Moon-gwang (Lee Jung-eun). Mrs. Park is led to believe that the maid's peach allergy is tuberculosis and a major threat to the family's medical well-being.

Parasite has ten principal characters - the four Kims, the four Parks and the dismissed housekeeper and her husband Geun-sae (Park Myung-hoon), a debt-ridden man hiding from the world. Collectively, they constitute a microcosm of a society riven by ever-widening divisions that are hard to wish away.

In one seemingly innocuous but telling scene in the mansion's living room while the Parks are away, Ki-taek, assailed by what resembles guilt, wonders if the driver whose job he took has found alternative employment. His daughter berates him. Think about us, she demands.

That is exactly what the insightful, though-provoking and unfailingly entertaining Parasite tells us. Self-absorption can take a tragic toll, but the young and the restless, as much as the weather-beaten and the world-weary, continue to live in hope. Such are the times we live. Parasite drives the point home with eye-popping precision - and the force of a windstorm.