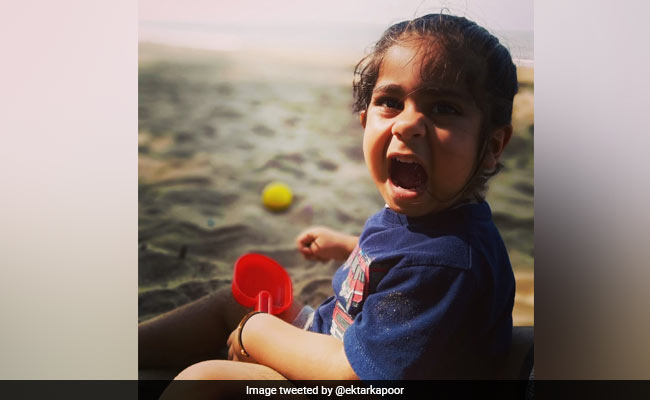 The Cutest Lohri Wish Award goes to Ekta Kapoor. The producer, on Wednesday, greeted her fans on Lohri with a million-dollar photo of her son Ravie and her friends from film and television industry, including Nimrat Kaur, Vikas Gupta, Vikrant Massey, Tahira Kashyap, Neha Sharma Iyer, Ridhima Pandit and Paridhi Sharma, can't get enough of it. It's easy to see why. Cute can't even begin to describe Ekta Kapoor's post. Ravie can be seen playing on the beach in the photo, sharing which Ekta Kapoor wrote: "Happie lohri from us! Oooo yaaaaa #burrrahhhhhhhhh." Reacting to Ekta Kapoor's post, Nimrat Kaur dropped this comment with equal excitement: "Happpppiessssst lohhhhhreeeee."

Ekta Kapoor became a single parent when she welcomed son Ravie via surrogacy in January in 2019. Ekta's brother, actor Tusshar Kapoor, also opted for surrogacy and welcomed son Laksshya in 2016.

Ekta Kapoor shares pictures of her little munchkin quite often on social media. On Tusshar Kapoor's birthday, she posted an adorable video featuring the mama-bhanja duo. "To know you is to love u! Happie bday Tusshar! I love u tush may u get all u want in life!" she wrote in her post.

Meanwhile, check out some more cute photos of Ravie: