Fast And Furious 9 Review: Aren't we glad that Vin Diesel and company are back with all the deafening din and destruction that the franchise draws strength from? 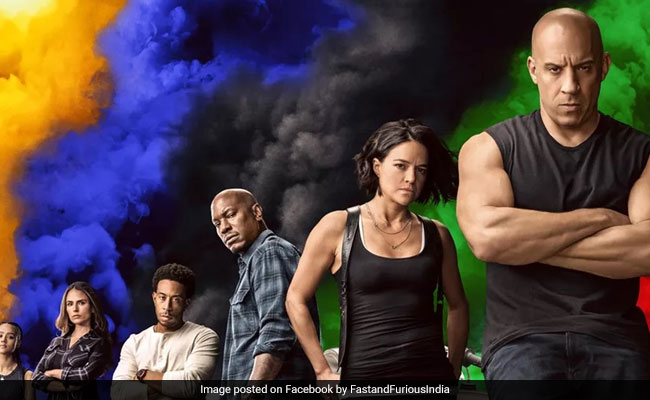 Fast And Furious 9 Review: A promotional poster of the film. (Image courtesy: FastandFuriousIndia )

Dominic Toretto (Vin Diesel) is pitted against his brother Jakob Toretto (John Cena) in Fast And Furious 9, a movie that spares no effort to live up to the long-running franchise's reputation. Excess drives the enterprise and gives it a frenzied tempo. It has no room for pitstops.

The plot broadly involves the male protagonist reuniting with his team to scuttle an evil conspiracy and smash everything in their way to shards. Daniel Casey and returning director Justin Lin's screenplay never veers away from formula. It conjures up gravity-defying stunts and electromagnetic mayhem that, in the pursuit of thrills, inevitably falls prey to the law of diminishing returns.

Dominic and Letty Ortiz (Michelle Rodriguez) are dragged out of a life of "peace and quiet" by their former mates. The mission is new, the tropes are old. The film takes them literally off the road and (in the case of a couple of the combatants) into outer space.

The action is unabashedly bonkers - cars drive through exploding landmines and over precipitous cliffs and often come out in one piece -and the fraternal animosity around which the plot is built is overly contrived.

A vehicle is stuck between two rock faces. As it slips towards the ground, it dangles over a landmine. The occupant wriggles out of the car in the nick of time. The landmine blows up. The automobile soars into the air and the mangled heap comes crashing down on the guy who has just escaped the blast. Or so it seems.

The man emerges unscathed from behind the billowing fumes. His mate asks: "How the hell are you not dead?" That is exactly the question that you, too, will be tempted to ask on a number of subsequent occasions to a number of the other characters caught in similar life-threatening situations. But this is Fast and Furious. So, no questions asked!

Roman Pearce (Tyrese Gibson) and Tej Parker (Ludacris) wonder at one point why they have emerged from so many dangerous missions without suffering so much as a scratch. Maybe we are not so normal, one of them concludes. Are you suggesting, Ramsey (Nathalie Emmanuel) interjects, that you two are invincible?

As the two hunky siblings whose muscles are far more expressive than their faces battle it out - one does everything in his power to protect the world, the other to control it - the film throws logic - and caution - to the wind.

That is the point that Fast And Furious 9 pivots around as Dom and his team - Letty, Tej, Ramsey and Roman - go all out to stop Dom's estranged brother from getting his hands on a device that could spell doom for the world. Dom's sister Mia (Jordana Brewster) resurfaces. Reluctantly, big brother lets her join his team.

It turns into a veritable family affair. Dom's little curly-haired son Brian also pops up now and then to underscore the power of a domesticated Dom. Fast And Furious isn't only about fights and fitful muscularity. It is also about two brothers and one sister trying to mend the ties that snapped several decades ago in tragic and fiery circumstances.

Fast And Furious 9 holds nothing back. Crashes and explosions continue unabated as a multiplicity of other characters, expectedly, jump into the fray. Dom's pals come calling with an SOS signal they have received from Mr. Nobody (Kurt Russell).

The latter's plane has crashed in a militarized zone in South America. In the fuselage, Dom and his team find one-half of a device that can hack any computerised weapons system and cause havoc. But they quickly lose it when a private army led by Jakob ambushes them.

Dom has to reckon with two other adversaries - unflappable cyberterrorist Cipher (Charlize Theron) and "spoilt rich prick" Otto (Thue Ersted Rasmussen), who believes that the world is run by men of his ilk. But Dom has plenty of active assistance available, notably from hacker Ramsey, who, despite never having learnt to drive, takes control of a massive truck carrying an electromagnet that sends vehicles in its path into wild flips and flops. If you still haven't got it, do not ask questions.

The anything-goes spirit that Ramsey, Tej and Roman bring to the table is a perfect commentary on Fast And Furious 9. These characters are human equivalents of the Pontiac Fiero fitted with a propulsion engine. They walk into bizarre situations with doubts in their minds but quickly, and merrily, shrug them off as the action engulfs them.

One character says to another, "If we follow the laws of physics, we'll be fine... it's all science and math." Take that with a fistful of salt and go along. Yes, the ride is dizzyingly bumpy and boggles and numbs the mind by turns.

Fast And Furious began all of two decades ago. It isn't 2001 anymore and the world has come a long way down the road. So, some of the action set-pieces that the film packs into its two and a half hours seem outdated, or at least do not take us by as much surprise as they did in the earlier films.

The changed times have had some impact on Fast And Furious 9 - the women are no longer mere props. The men still do most of the heavy lifting, but the girls, too, get their moment in the sun. Be it Rodriguez, Brewster, Emmanuel or newcomer Anna Sawai, none of them is a mere appendage.

Be aware of what Fast And Furious has become and where it is headed - that is precisely what Dom, too, wants to find out about a brother who has gone rogue - and you will probably not be unduly flummoxed by the heights of absurd exaggeration that the film reaches for.

Fast And Furious 9 is the first big Hollywood film to arrive in our cinemas in many months. Aren't we glad that Vin Diesel and company are back with all the deafening din and destruction that the franchise draws strength from?

Granted that F9 is too hackneyed to be heady, but the fact that it is still zipping around unmindful of what the world has been through is, in a way, reassuring.

Nick Jonas Is All Hearts For This Pic With Priyanka Chopra