Double XL Review: The film is a female-led dramedy that addresses the issue of body image and its repercussions but somehow seems to believe that men deserve a lot of play. 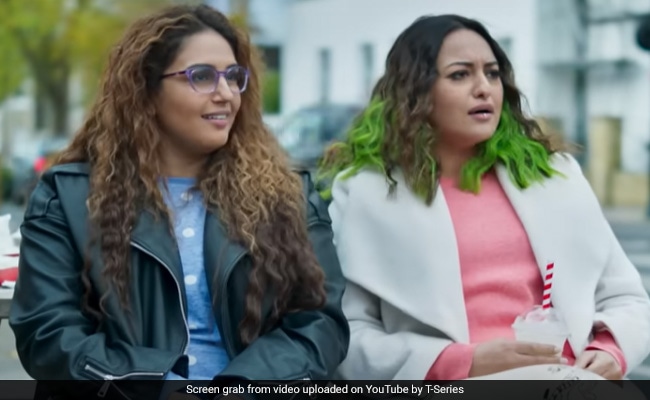 It has plus size ambitions but Double XL, directed by Satramm Ramani, lacks the wherewithal to measure up to the demands of its weighty theme. All flab and fluff and not much fun, the film never gets its punches right, what with the actors screaming their lungs out at the slightest provocation and still failing to make their point.

Double XL, with its one-size-fits-all approach, translates into more than just double trouble. It makes a terrible hash of a story of two victims of body-shaming who learn to take all swipes on the chin and fight on to prove to the world that the clothes that fit them do not define who they are.

It wants to make a lofty statement. All it manages to be is a flimsy 130-minute film that says what it has to all within the first ten minutes. The rest is mere padding.

Double XL, written by Mudassar Aziz and Sasha Singh, wades through loads of banality. With the writing all over the place, the two principal characters, played by Sonakshi Sinha and Huma Qureshi, reduced to perpetuating frogmarching stereotypes rather than being allowed to create real, empathetic portraits of women of substance.

The defiant duo gorges on junk food and carps incessantly about being picked on. Burgers and ice-cream scoops are their symbols of rebellion against a world that wants them to fit in. But it is really never clear why they must stuff themselves to assert themselves. In presenting them as two girls who love going on a binge when the chips are down, the film turns them into caricatures that reinforce the notions that they are out to fight.

Sonakshi and Huma are trapped in roles that allow little room for development beyond the physical attributes of the two characters and the treatment that they receive on account of how they look. These are two women with gifts that have the power to fetch them everything that their heart desires. It takes them forever to reveal their hands. They mope way too much to be convincing.

The pair has to reckon with the screenplay's lack of nuance. The film fluctuates between the stolid and the just about serviceable, with the former weighing heavy on the latter more often than not.

What is Double XL really about? Two talented young women grapple with obstacles as they chase their professional dreams in London. Their aspirations are thwarted because they do not conform to standards of beauty prevalent in their respective industries. They battle to find their place in the sun. It does not yield an engaging spectacle.

Although Double XL is focused on a thorny theme, it takes recourse to drollery to liven things up. Much of the humour, especially in the film's first half, does not hit home because the characters on the screen fall prey to a build-up that is not only half-hearted but also lopsided.

Feisty fashion designer Saira Khanna (Sinha) is a Delhiite who hopes to launch her own label one day. Her introduction scene catches her in the middle of a raging showdown with a man in an apparel store over the supposedly wrong size tag on a dress that she wants to buy for an upcoming party at her boyfriend's place.

Rajshree Trivedi (Qureshi) is a Meerut girl who has her sights set on a career as a television sports presenter. When we first see her, she is in the middle of a dream in which cricketer Shikhar Dhawan requests her for "the pleasure of a dance". Her waking hours aren't as happy. She has to deal with a mother (Alka Badola Kaushal) who frets and fumes over her reluctance to get married and settle down.

The paths of Saira and Rajshree cross by chance when the two are at the lowest ebbs of their lives - one has lost the chance to helm a fashion travelogue, the other has been told to her face that she has no chance of landing the job she craves. When all seems lost, a brainwave strikes Saira. She talks Rajshree into accompanying her to London for a shoot.

Two men join them in their endeavour. Srikanth Sreevardhan (debutant Mahat Raghavendra), a Tamil cameraman who speaks just enough Hindi to get by, completes a three-member crew. In London, they are met by a garrulous line producer, Zorawar Rahmani (Zaheer Iqbal). He revels in all manner of excess, neither funny nor useful.

Zorawar - Zo, Zee, Zoo, call me what you will, he keeps parroting - resorts to a lie to set up an interview with cricket legend Kapil Dev (who puts in a brief special appearance). The encounter, a crucial plot point, becomes just the opening that Rajshree needs. The brownie points that it helps her earn comes in handy when push comes to shove.

It is not until its last 30 minutes that Double XL comes anywhere near springing to something akin to life. As breakthroughs beckon, Saira and Rajshree are poised at emotional turning points that give the principal thematic context of Double XL a modicum of shape and clarity. Until this juncture in the story, the film meandering mess in search of an ill-formed core. A case of too little too late.

Double XL is a female-led dramedy that addresses the issue of body image and its repercussions but somehow seems to believe that men deserve a lot of play. Rajshree's mother is the biggest thorn in her side, constantly pillorying her for not controlling her diet. Her dad (Kanwaljit Singh) is the supportive one, constantly egging her on to follow her heart.

Saira has an obnoxious boyfriend. Her elder brother, who holds a position of authority in a television network, always has her back. Once she and Rajshree are in London, the two men they work with become their principal sources of strength.

It is hard to believe that these two 'tough' girls would need the helping hand of a man at every step in finding their feet in a world that they have already sized up to perfection. If only the men behind the film had sought and factored in advice from women, Double XL might not have sunk into the sort of morass of mediocrity that it wallows in.