Debina Bonnerjee And Gurmeet Choudhary Fought On The Sets Of Ramayan. Because, Make-Up

"Gurmeet and I would actually fight about who would get into the makeup seat first," said Debina 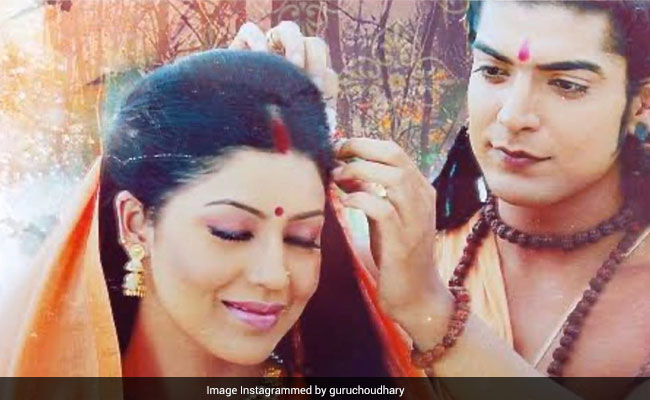 Debina and Gurmeet in a still from Ramayan. (Image courtesy: guruchoudhary )

Debina Bonnerjee And Gurmeet Choudhary, who are best-known for starring in NDTV Imagine's 2008 TV series Ramayan, recently found a spot on the list of trends after Debina revealed that the real life couple used to fight on the sets of the show for getting their make-up done first. Debina, who starred as Sita in the show, in an interview, told Times Of India, "Gurmeet and I would actually fight about who would get into the makeup seat first, so the other could catch up on some sleep in the meantime. We would just aim at getting ready as quickly as we could, to rest for a while before getting onto set for the day."

Debina said that due to the long shooting hours, she and Gurmeet were usually sleep deprived. She added, "I remember how taxing the first few days of the shoot were for Gurmeet and I, because getting into our costumes with all the excess makeup and jewelry took really long. Though over time we managed to get ready really fast, because we then finally got used to the routine and somehow it increased our speed of getting into our attire as well. But due to the long hour shoots, we were always low on sleep."

Gurmeet Chaudhary and Debina Bonnerjee first met on the sets of their 2008 television series Ramayan, in which he played the role of Lord Ram and Debina co-starred as Sita. After few years of dating, Gurmeet and Debina got married in a private ceremony in 2011.

Gurmeet has also appeared in shows like Geet - Hui Sabse Parayi and Punar Vivah, while Debina played the antagonist in the TV show Santoshi Maa. Gurmeet made his Bollywood debut in Khamoshiyan and later starred in Wajah Tum Ho. The couple featured in the TV reality shows Pati Patni Aur Woh and Nach Baliye 6.

Amitabh Bachchan Writes About Destiny From Hospital's COVID Ward: "This Confine Of Mine Has One Too"