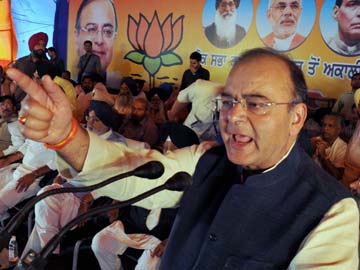 New Delhi: Senior BJP leader Arun Jaitley today said media reports that claimed that there was a proposal to field Priyanka Gandhi Vadra against Narendra Modi in Varanasi confirmed that the "Gandhis are under siege."

Priyanka Gandhi has denied a newspaper report that said she had offered to take on the BJP's prime ministerial candidate but the proposal was shot down by senior Congress leaders.

She told NDTV that there was no proposal for her to run against Mr Modi in Varanasi in Uttar Pradesh, stressing that her family including brother Rahul have told her they would whole-heartedly back her if she ever decides to contest an election. (read: Rahul thinks I should contest, my decision not to: Priyanka Gandhi to NDTV)

In a blog, Mr Jaitley said, "The situation is akin to what happened to Indira Gandhi and Sanjay Gandhi in the run up to the 1977 general elections. Economic populism did not work. The family charisma has faded away. But a party which is merely a crowd around a family probably felt that the current leader in the family has not clicked. The real solution to the problem is to make Congress a more structured party. The Congress party solution is, if one incumbent in the family fails, the alternative can only be another member of the family." (Read full text of blog here)

Rahul and Priyanka are the grandchildren of Indira Gandhi.

Promoted
Listen to the latest songs, only on JioSaavn.com
Mr Jaitley said he "wished" that the desperate solution of Varanasi had been actually implemented. "The country now needs the myth of the other family member also to be exploded," he wrote.

He also targeted the Congress over a report that suggested that the party had asked its chief ministers to "win seats or face replacement." He wrote, "If the Congress loses, it is not because of its chief ministers. It is squarely because of the quality of government they ran and the non-inspirational personality of Rahul Gandhi. When the problem is within the family, why is the Congress looking for scapegoats outside?"
Comments
Priyanka GandhiArun jaitley