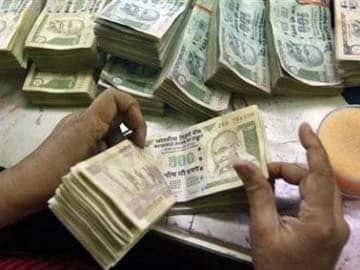 According to the Election Commission, cash seized in the three weeks since the election was announced has already surpassed Rs 190 crores for the whole of the 2009 ballot period. (File photo)

New Delhi: Election officials have seized a record $36 million dollars or 217 crores of cash concealed in cars, private planes and even ambulances that they say was destined to buy off voters and pay for expenses over and above the spending limit. (India Votes 2014: Full coverage)

Opinion polls show the opposition Bharatiya Janata Party (BJP) and its allies coming to power thanks to the popularity of its prime ministerial candidate Narendra Modi and widespread disgust with the Congress party, whose last years in power have been dogged by corruption scandals and a sharp economic slowdown.

Cash seized in the three weeks since the staggered election was announced has already surpassed Rs 190 crores for the whole of the 2009 ballot period, the commission said.

Voting in this year's election began on April 7 and winds up on May 12. (See full schedule here)

The Election Commission has also recovered 100 kg of heroin, most of it in Punjab that has long been a transit point for drugs from Afghanistan, but is now itself India's heaviest consuming opium state.

More than 10 million litres of liquor have been seized, too, over the past 20 days as politicians pour resources into an election that will cost an estimated $5 billion or 3000 crores by the time it ends, second only to the last US presidential election.

"The seizures that we have made of cash, liquor and drugs are far bigger than we had anticipated. The scale of the problem is immense," PK Dash, who leads the expenditure monitoring effort at the independent Election Commission, told Reuters.

He attributed the increase to the growing number of business leaders getting involved in politics, as Asia's third-largest economy gears up for an expected second generation of reforms to restore rapid growth.

"A couple of elections ago it was not such a game of money," Dash said. "Now you have business people in politics, whereas earlier they were involved in managing their empires."

State funding has been mooted in the past to stop illicit spending, but the idea has never taken off.

Critics say a first-past-the-post system for electing lawmakers means the pressure on candidates to outspend their rivals is intense. And in a country where nearly a third of the population of 1.2 billion is estimated to live on less than $1 a day, relatively little money can go a long way.

With a legal spending limit of 7 million rupees ($116,200) for each parliamentary seat at stake, much of the money being spent by candidates has been driven underground.

They splash out on political rallies, luring voters and party workers with free meals, cash in envelopes, plastic pouches of alcohol and - in the case of the youth of Punjab - small black balls of opium paste that they drink with tea.

Dash said his team had found cash in the dashboards of cars, liquor in milk vans and synthetic drugs in trucks carrying vegetables.

One man caught with 40 million rupees in a small car at a checkpoint in the northern town of Ghaziabad three days before polling there said he was a businessman.

But he could not explain what his business was and he seemed to have no source of income. Police filed a case against him, one of 9,000 lodged across the country since the campaign began.

In two southern states, vans carrying banknotes for bank ATMs were discovered with sacks of unaccounted-for additional money. Cash was also found in an ambulance in Odisha after a policeman noticed a suspiciously high number of the vehicles on the move in a remote corner of the eastern state.

To escape detection, politicians are handing out coupons to voters that they can use to get free alcohol and food.

In Punjab, the commission has seized cartons of pink coupons that voters can exchange for a free chicken, blue coupons for local liquor and green ones for branded spirits.

More worrying is the distribution of drugs that is worsening an already serious problem in Punjab.

Besides heroin smuggled from over the border with Pakistan, record seizures of synthetic drugs have been made in the past month, the state's additional electoral officer Raminder Singh said.

"It is contraband goods. You can't say for sure for what purpose, (but) the fact that it has been caught during the election period makes it suspect," said Singh.

Anita Sharma, an architect-turned-civil rights activist who is leading a campaign against drug abuse in elections in Punjab, said political workers hand out capsules of home-made drugs to youths who campaign for a candidate.

Promoted
Listen to the latest songs, only on JioSaavn.com
"They are fanning an already serious drug problem here," Sharma said, citing a 2009 affidavit that the state government submitted to the high court saying 67 per cent of rural households in Punjab were home to at least one drug addict.

She and a band of women travel each day to the worst-affected areas to urge womenfolk to report instances of drug distribution. They all carry bread rolling pins in their hands as a symbol of their determination to flatten offenders.
© Thomson Reuters 2014