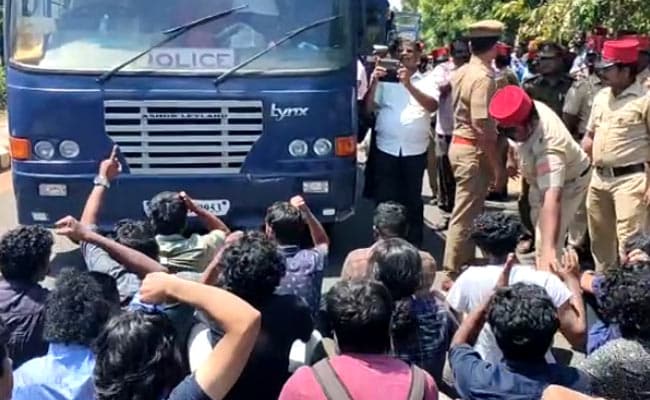 As M Venkaiah Naidu, Vice President of India, due to attend the 28th annual convocation of Pondicherry University tomorrow at the administrative building, the varsity administration taken away the students agitating against the recent fee hike at the Administrative Block and kept them within the University Campus, "as a safety measure to maintain Law & Order", said an official statement. Contradicting the claims by the varsity, the students said the security, 'using force', dragged the protesters out and beat them up.

An official statement from the varsity said several efforts were taken by the administration continuously and consistently to address the issues raised by the agitating students, who have been sitting in the administrative block for the past 20 days demanding the withdrawal of fee hike.

"High-Level Committee was constituted to redress the grievances of students.  The matter pertaining to reduction of fees has being looked into by the University authorities to the possible extent. The University came forward with a 20% reduction in the fees for students from marginalized and weaker sections, who actually deserve," the varsity said.

"While this is the demand raised by the students all through today they have added suddenly, an issue which was settled during the earlier council other two demands of withdrawal of transportation fee and implementation of 25% Reservation for the students of Union Territory of Puducherry in all courses, to add fuel to the fire and to further unsettle the smooth functioning of the University and to mislead the entire students community," the statement said.

"We, the students of Pondicherry central university are in great distress. Despite being a public funded university the fees for all the courses have increased even up to 125% which is not affordable for common students who arrives to the university even after being top in the entrance exam," the protesting students said in a statement while adding that, "The administration is turning the university in to a corporate system in which students from marginalised section are totally getting avoided".

"Coming to know that we won't move an inch back from our rights, today, the administration is using force and dragging out students and beating them up. They are denying the fact that the university is for students," the added.

"Whatever happens," the protesting students said that they "will continue to fight till the noble cause is satisfied".

As a security measure and protocol associated with the visit of the VVIPs for the convocation ceremony, the campus has been brought under tight security zone of security agencies, 24 hours prior to the convocation.

"University Authorities tried their level best to avoid these unforeseen developments by engaging four rounds of talks with students which did not succeed because of the adamant attitude of the agitating students. The effort to settle this impasse shall however continue in all sincerity," the varsity said.