An employee of a garment making unit at the IT hub Techno-park here, Ms Revathi scored 100 per cent marks in the special examination, conducted by the state-run Kerala State Literacy Mission Authority. 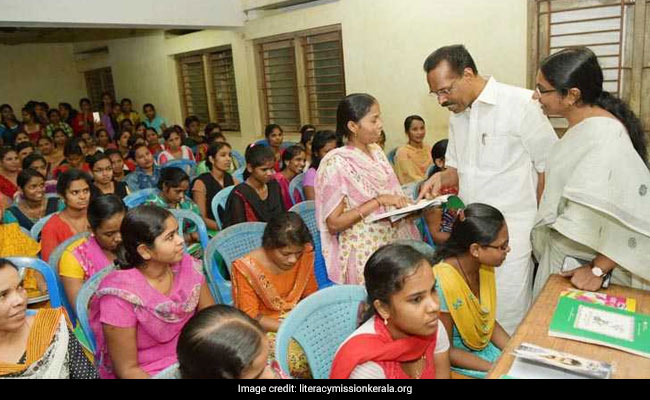 Malayalam, the mother tongue of Keralites, is generally considered a hard language to learn, with many tongue twisters. But this was not a hindrance for Mudad Revathi, a migrant labourer hailing from Odisha, to master this classical language in a short span of time and score the highest mark in a literacy examination here.

An employee of a garment making unit at the IT hub Techno-park here, Ms Revathi scored 100 per cent marks in the special examination, conducted by the state-run Kerala State Literacy Mission Authority.

The 100 marks-exam was activity oriented, giving a thrust on reading, writing and arithmetical skills.

Ms Revathi had been learning Malayalam for some time under the state-wide "Changathi" programme, an initiative of the Mission to impart Malayalam and basic education among migrant labourers who arrived in Kerala seeking green pastures.

She, along with several other migrant workers from different states, recently wrote the exam, the results of which was announced Monday.

"I tried to spend at least two hours to learn Malayalam every night after my work," Ms Revathi said.

Besides her, Viki Kumar, a worker from Bihar, also scored 100 per cent marks, a Mission release said here.

Proving that age is no barrier for learning, 90 year-old Mythili, a native of a fishing hamlet in Kozhikode, has secured full marks as part of the "Aksharasagaram", another flagship initiative of the Mission to eradicate illiteracy among fisher folk in the state.

Recently, Karthyayani Amma, a 96 year-old neo-literate had hit the headlines by scoring 98 marks out of 100 under the "Aksharalaksham" project.

Besides "Changathi" and "Aksharasagaram", the Mission has also conducted examinations under the "Navachetana" and"Samagra" programmes, envisaged to educate backward classes and tribals respectively, the release added.

(Except for the headline, this story has not been edited by NDTV staff and is published from a syndicated feed.)
Comments
Kerala Literacy MissionKerala State Literacy Mission