Despite the deteriorating air quality, satellite trends have so far indicated a marked reduction in instances of stubble burning in Punjab and Haryana this year. 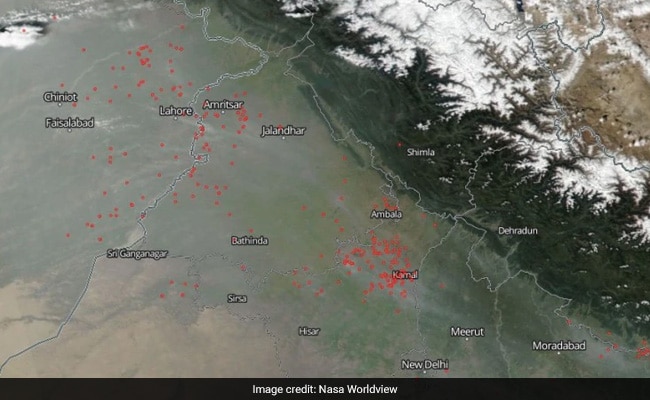 The red dots indicate stubble burning in neighbouring states such as Haryana and Punjab.

In a letter to Union Health Minister Harsh Vardhan, Delhi Environment Minister Kailash Gehlot claimed that stubble burning in neighbouring states through November has "always contributed significantly to higher PM2.5 levels" in the national capital. The claim came a day after the Supreme Court-mandated Environment Pollution (Prevention and Control) Authority said that local sources of pollution in Delhi, Uttar Pradesh and Haryana are the primary reasons for poor air quality that plagues the national capital every winter.

Stubble burning is a post-harvest practice aimed at clearing fields. Despite a government-imposed ban, it still takes place in many parts of North India. However, satellite trends so far have indicated a marked reduction in instances of stubble burning in Punjab and Haryana this year.

A report from the centre-run System of Air Quality and Weather Forecasting And Research held some hope for the national capital amid renewed reports of crop burning. "Surface winds are slow and variable, and the wind direction at the surface and transport height is south-southwesterly, which is not quite favourable for efficient transport of fire plumes towards Delhi. In this condition, drastic deterioration of air quality is not expected over the next two days," the report said, predicting that the city's AQI will fluctuate between the higher end of "poor" category and the lower end of the "very poor" category.

The India Metereological Department, for its part, said that the city's air quality is likely to improve due to changing weather conditions. "A fresh western disturbance may impact the Western Himalayan region from October 18. It may also enhance the wind speed, which will help disperse pollutants," said Kuldeep Srivastava, a senior scientist with the department.

Meanwhile, the authorities banned generator sets -- barring those used for essential and emergency services -- across the national capital region in an attempt to halt the rise in pollution. It was part of the Graded Response Action Plan, a set of strict anti-pollution measures to be taken in keeping with the severity of the pollution.