The agitation against the Citizenship (Amendment) Act (CAA) at Shaheen Bagh began in mid-December following a violent protest against the law at Jamia Nagar. 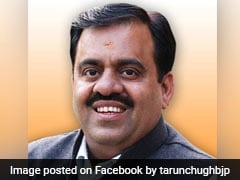 With the Delhi assembly polls just over a week away, the BJP has upped its ante against anti-CAA protesters at Shaheen Bagh, with a top party functionary on Wednesday saying the national capital will not be allowed to become "Syria".

The agitation against the Citizenship (Amendment) Act (CAA) at Shaheen Bagh began in mid-December following a violent protest against the law at Jamia Nagar.

BJP national secretary Tarun Chugh in a tweet alleged that the Shaheen Bagh protesters are trying to create fear in the minds of the people of Delhi by blocking roads.

Protesters, most of them women, have blocked a main road connecting areas in south-east Delhi with Noida, posing hardships for locals and commuters, including office goers.

"We will not let Delhi become Syria and allow them to run an ISIS-like module here, where women and kids are used."

"They are trying to create fear in the minds of people of Delhi by blocking the main route. We will not let this happen. (We will not let Delhi burn).#ShaheenBaghKaSach," Mr Chugh tweeted.

This is not the first attack on protesters.

BJP MP Parvesh Verma on Tuesday raised the spectre of Shaheen Bagh''s anti-CAA protesters in their lakhs entering homes to rape and kill women, provoking opposition outrage as the Delhi election chief submitted a report on his remarks to the Election Commission.

On Wednesday, Union Home Minister Amit Shah asked voters to press the EVM button "so hard" on February 8 that the "shock" (poll result) is felt at Shaheen Bagh.

He was addressing election meetings at the Najafgarh and the Beejwasan constituencies for the Delhi polls.

Mr Shah, the former BJP president, in a booth level workers' convention in December 2019, had said that his party will form the next government in Delhi highlighting achievements of the Modi government and exposing the failures of the Kejriwal dispensation.

Blazing the campaign trail by holding two to three small meetings every day in different constituencies, Shah has attacked the Kejriwal government, alleging that it has not fulfilled its promises.

Despite focusing on the CAA and Shaheen Bagh protest, BJP leaders are also talking about local issues.

BJP's in-charge for the polls and Union Minister Prakash Javadekar on Tuesday listed various works of the Modi government in Delhi and accused Chief Minister Arvind Kejriwal of creating obstacles and delaying schemes and projects, including Metro''s Phase IV, the Ayushman Bharat health scheme and the Dwarka Expressway.

"The BJP is contesting assembly elections on the issue of development," he said.

A top BJP officer bearer said, "Our surveys conducted last week, show that three out of four people are favouring the BJP. Currently, we expect to win around 45 seats."

He said that the BJP got just over 32 per cent votes in the 2015 assembly polls but this time expects to obtain 10 per cent more votes to win enough seats to form the government.

In 2015, the BJP was routed by the AAP, managing to win just three seats. The party is contesting the polls on 67 seats, leaving three to its alliance partners JD(U) and LJP.