Delhi is among the worst-hit states in the country, with over 6,000 cases and 68 deaths. 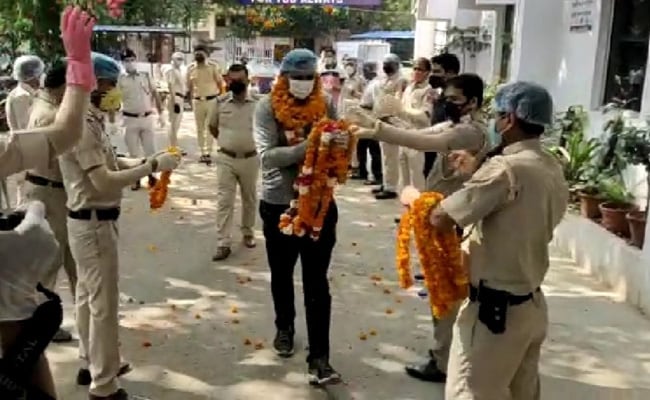 Coronavirus cases: Delhi has reported over 6,000 cases and 68 deaths.

A man wearing a mask -- his head covered with a surgical cap -- is seen walking with folded hands as a group of policemen garland him as he walks past them towards the entrance of a police station, where lady constables apply tilak on his forehead before he enters the building. A group of men are also seen playing their dhol drums all along.

This is how the police officers at a police station in Delhi's Amar Colony welcomed their colleague who joined duty after recovering from the deadly COVID-19 infection on Saturday. The officer is among the five police officer who have contracted the viral infection that has affected nearly 60,000 people in the country.

India reported 3,320 new coronavirus patients and 95 deaths linked to the highly contagious illness in the last 24 hours, bringing the total to 59,662 cases, the Union Health Ministry said this morning. At least 1,981 COVID-19 deaths have been registered so far and 17,847 patients have recovered, according to the government data.

Around 60 per cent of COVID-19 cases have been reported from eight major cities, including Mumbai and Delhi, data from the respective state governments showed.

Businessman, 39, Robbed In Front Of His Family At Gunpoint In Delhi