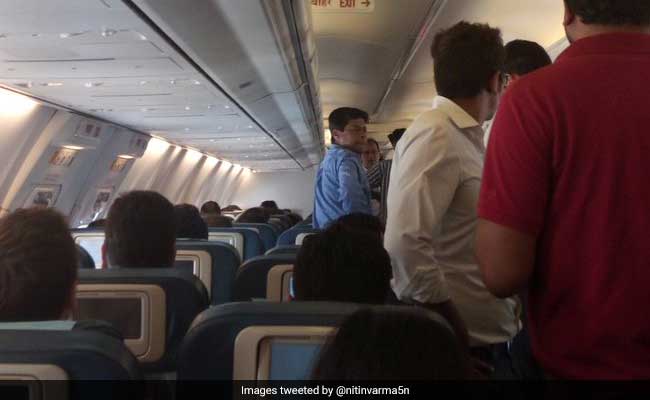 Jaipur: There was high drama at the Jaipur airport on Thursday after a passenger on-board a Jet Airways flight tweeted to Prime Minister Narendra Modi about the plane being possibly hijacked. The Jet Airways flight, from Mumbai to Delhi, had been diverted to Jaipur due to poor weather conditions in the national capital. The flight had 176 people on-board, including eight crew. The passenger, travelling from Mumbai, tweeted to PM Modi:

@narendramodi sir we have been in jet airways flight for past 3 hrs , looks like hijacked, pl help 9W355,. pic.twitter.com/bcRXcCLgic

To this, Jet Airways responded, "Hi Nitin, our flight 9W 355 has been delayed due to air traffic congestion at Delhi."

Unsatisfied, the passenger again tweeted, "Can we get a confirmation with proper justification because other flights schedule after that got clearance from Mumbai to Delhi."

The passenger was offloaded for questioning by security agencies at the Jaipur airport. No information about further action taken with respect to the passenger was provided, reported the Press Trust of India.

A thorough check was carried out at the Jaipur airport by security agencies. Necessary security protocols were also carried out after the plane landed at its original destination - Delhi.

A Jet Airways spokesperson later said a passenger tweeted a message involving security threat necessitating activation of the security protocol in a statement.

"The information was promptly shared with the concerned authorities including the CISF, and the Bureau of Civil Aviation Security (BCAS) and local law enforcement agencies in line with Standard Operating Procedures," he said.

Promoted
Listen to the latest songs, only on JioSaavn.com
Acting Jaipur International Airport director MP Bansal told Press Trust of India that five Jet Airways and one Oman Air flight coming from different locations which were supposed to land in New Delhi were diverted to Jaipur airport due to bad weather conditions.