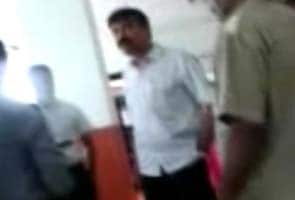 Nashik: Anil Kadam, a state legislator from Niphad in Maharashtra's Nashik who was caught on camera hurling abuses at an all-women plaza in Maharashtra, has resigned from his post.

On Thursday, the Shiv Sena leader was passing through a toll plaza in his constituency when the staff stopped his car and asked for the toll payment of Rs 40.

The police said Mr Kadam apparently lost his cool and warned the all-women staff, "B********, in spite of my saying it, you don't let the car pass. I'm warning you, I will ask the women of my family to strip you."

The litany of abuse continued from Mr Kadam. "M********, I told you I am MLA and I also gave my car number. You are running the toll in my area. I will create hell for you." Then he ordered his supporters, "Go break things."

They obliged by vandalising the booths at the toll plaza, breaking a computer.

State legislators' cars are exempted from the toll but Mr Kadam was reportedly travelling in a private car.

Promoted
Listen to the latest songs, only on JioSaavn.com
A complaint was registered by the women staff at the toll against the MLA.