In response to the outbreak the National Human Rights Commission (NHRC) yesterday sent notices to the Union Health Ministry and the Bihar government, giving them four weeks to respond

Bihar Chief Minister Nitish Kumar was today met by a crowd of angry parents and protestors chanting "wapas jao (go back)" on his first visit to Muzzaffarpur since an outbreak of Acute Encephalitis Syndrome 17 days ago. The protesters expressed fury at the delayed visit and alleged hospital officials cared more about that than caring for patients.

"This is today's development (pointing to a water tanker). Things are being spruced up so that it makes a favourable impression on the chief minister. Had the CM visited earlier, it would have made the concerned people pull up their socks and many lives could have been saved," a protestor was quoted in a PTI report.

Acute Encephalitis Syndrome (AES) has killed 126 children so far, with 107 deaths reported from Muzzaffarpur and surrounding districts. Mr Kumar, who was accompanied by Deputy Chief Minister Sushil Kumar Modi, met children admitted to Sri Krishna Medical College and Hospital (SKMCH) and their parents, but left without facing the protestors.

SK Shahi, the medical superintendent of SKMCH, said, the Chief Minister was "satisfied" by his interaction with patients and relatives.

"The Chief Minister met the patients and their relatives. He was satisfied with the present medical treatment being provided and ordered us to release a bulletin daily at 3 pm. He was pained by the fact that adequate facilities for treatment were not available here," he said. 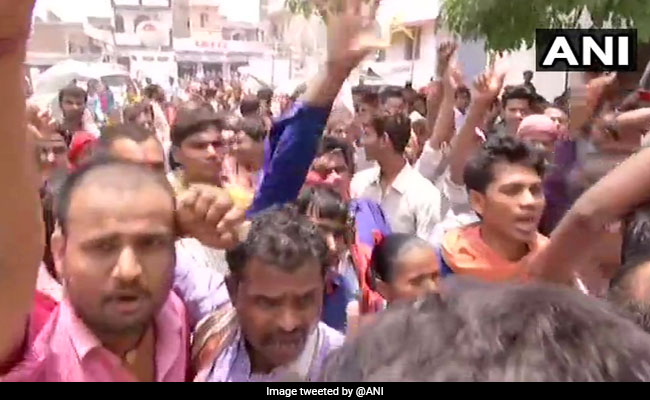 Following the Chief Minister's visit, Bihar Chief Secretary Deepak Kumar declared that SKMCH would be converted into a 2,500-bed hospital.

Bihar Chief Secy: It's been decided that SKMCH will be converted into 2500-bed hospital, currently it has 610 beds. In next 1 yr, it'll be taken up to 1500 beds & 2500 later. A 100-bed ICU will be made there, it has 50-beds.A 'dhrmshala' will be built there for relatives&families pic.twitter.com/9uoiarpZAN

Mr Kumar had earlier announced that "ex-gratia of Rs 4 lakh each will be given to families of the deceased" and that ambulance facilities would be free of cost; patients coming to the hospital in private vehicles would be reimbursed at a flat rate of Rs 400.

The Chief Minister also said that medical expenses would be borne by the government.

Union Health Minister Harsh Vardhan yesterday chaired a high-level meeting and directed the establishment of virological labs across the state and the setting-up of a 100-bed paediatric Intensive Care Unit (ICU) at the Sri Krishna Medical College and Hospital (SKMCH).

The National Human Rights Commission (NHRC) said the deaths could indicate a "possible flaw" in implementation of vaccination and awareness programmes. Notices were sent yesterday to the Union Health Ministry and Bihar government. They have been given four weeks to respond.

Acute Encephalitis Syndrome (AES) is a viral disease that causes mild flu-like symptoms such as high fever, convulsions and headaches. The state health department has cited hypoglycemia, a condition caused by very low level of blood sugar, as one of the main reasons for the deaths.

With inputs from IANS, ANI, PTI