Excerpt: The Fable Nawaz Sharif Shared With Atal Bihari Vajpayee When They Met 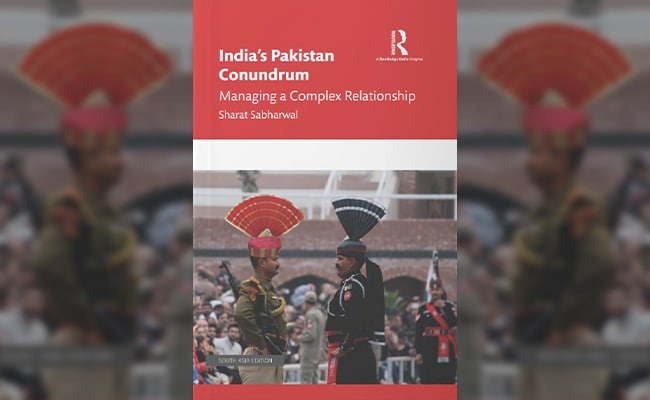 The cover of 'India's Pakistan Conundrum: Managing A Complex Relationship' by Sharat Sabharwal

At the Prime Ministers' meeting with their delegations during Prime Minister Atal Bihari Vajpayee's visit to Lahore in February 1999, Prime Minister Nawaz Sharif informed a partly surprised, partly amused Indian Premier that he wished to tell him a joke about a greedy courtier in Maharaja Ranjit Singh's court. Keen to wangle some money out of the Maharaja, the courtier told him that he had seen his Abba ji (father) in a dream the previous night and was advised by him to meet his son, who would give him a hundred ashrafis (gold coins). The Maharaja sensed the courtier's intention and told him that he too had seen his Abba ji in a dream the previous night and was advised by him to beware of the courtier, who might ask him for a hundred ashrafis. Instead he should hit him a hundred times with his 'jutti' (footwear). At this, the courtier said, "What sort of Abba ji do you have? He says one thing to me and quite the opposite to you." There was a pregnant pause as we all tried to figure out the relevance of the tale to the work at hand. Nawaz Sharif broke the silence and said, "Vajpayee Saheb, let's talk directly to each other, because if we talk through the Americans, they will say one thing to you and another to us." The gathering broke into laughter as the meeting moved on to other issues.

Nawaz Sharif's counsel was contrary to Pakistan's conduct in repeatedly seeking third party intervention on Jammu and Kashmir. But it did point to a self-evident fact that third parties serve their own interest before serving the interests of the countries they mediate between. As stated elsewhere in this book, other countries have often leveraged their tilt towards India or Pakistan to bolster their own interests. Nawaz Sharif was also preaching to someone who was convinced of the value of dialogue. During his tenure as Prime Minister, Vajpayee repeatedly faced grave provocations from Pakistan - Kargil, hijacking of an Indian Airlines aircraft in December 1999 and an intense wave of Pakistan sponsored terror in India, including the terror attack on the Indian Parliament in December 2001. He responded resolutely to end the Kargil incursion and ordered Operation Parakram after the Parliament attack, though it was only a partial success. But he never lost faith in dialogue and diplomacy. His visit to Lahore was followed by the Kargil incursion and yet he invited its architect, Pervez Musharraf to Agra within two years for talks. He ordered ceasefire on the LoC in November 2003 and paved the way for dialogue through his January 2004 visit to Islamabad to attend the 12th SAARC Summit. He also initiated back channel discussions on Jammu and Kashmir that continued during the tenure of his successor, Dr. Manmohan Singh.

Being immediate neighbours, India and Pakistan cannot wish each other away. When they have not been talking across the table, they have often done so through guns. Each time guns have become too loud, it has brought intervention of influential countries to defuse the situation. Since the Shimla Agreement, India has remained firmly committed to bilateralism to resolve the issues with Pakistan and yet has often done messaging through the Americans and other countries in moments of crisis. There is nothing unusual about such messaging. It happens all the time between other estranged countries. However, it needs to be acknowledged that when not talking directly with Pakistan, we have often done so through third countries.

Frustration with dialogue among India's policy makers and the Indian public stems from the fact that it is regarded as a concession to Pakistan in return for which Pakistan should become a normal state and abnegate terror. This is not going to happen anytime soon because of Pakistan's internal dynamics. India has to deal with Pakistan as it is and not as India wants it to be. Moreover, dialogue per se is not a concession and need not result in any concession unless India decides to make one.

Further, it goes without saying that so long as Pakistan persists with its hostility and terror; deterrence, coercion and calibrated retribution will have to remain a part of India's policy. However, having spent long years in the Foreign Service, I believe that diplomacy and dialogue have a place even in a most difficult relationship. Voicing their national positions and delivering and receiving protest notes is the easier part of diplomats' work. The real challenge for them lies in looking for some common ground even in the most demanding situations. Moreover, while dialogue has so far not shown the potential to mould Pakistan's behaviour according to India's wishes and change the nature of the relationship, it can contribute to promotion of a lesser, nonetheless important, goal from India's point of view of managing the relationship, with lower levels of volatility and violence, so that its violent swings do not distract India from bigger challenges such as economic transformation of the country and dealing with an increasingly aggressive China. It also facilitates engagement with the segment of opinion in Pakistan that favours a better relationship with India. In the past, it has helped India in making gains, albeit incremental, in areas such as trade and people to people contacts that are anathema to Pakistan's security establishment and cut at the very roots of the security state paradigm espoused by them.

Reproduced from India's Pakistan Conundrum: Managing a Complex Relationship by Sharat Sabharwal with permission of INFORMA UK Limited through PLSclear. Order your copy here. No part of this extract may be reprinted or reproduced or utilised in any form or by any electronic, mechanical, or other means, now known or hereafter invented, including photocopying and recording, or in any information storage or retrieval system, without permission in writing from the publishers.

Book Excerpt: Gautam Adani Called "Toofani", Why He Dropped Out Of College