She Said 'Thank You Mama,' Now I'm A Belieber

How many mothers would shepherd a 12-year-old across hundreds of kilometers to watch a 23-year-old tattooed, boy wonder? Plenty, as I discover (with relief) on a plane loaded with enchanted teens and pre-teens undertaking this yatra from Delhi to Mumbai for a darshan of Baba Bieber.

Seated next to me is the mother of a young teen. "Justin Bieber?'' I ask. She smiles. I nod to say, "I understand'.

And they sway trance-like down the aisle of the plane. Adolescents from many Delhi schools, united in their worship of Bieber, many making their first trip to the city of stars. They've earned their tickets - moving their parents with their devotion to good grades, good behavior and healthy, gadget-free diets.

This plane is clearly divided on religious lines. The religion of music, that is. There are Beliebers - as the fandom of Justin Bieber call themselves and the non-Beliebers, that includes skeptical mothers such as I, who relented to the power of teenage persuasion and booked those precious tickets.

For a generation raised on the Beatles, Abba, Queen, the Eagles, Doors, Billy Joel and Sting, Bieber feels like a long way from home.

"You're taking two days off for Justin Bieber!" The voices of my bemused colleagues ring in my ear. It's for my daughter, not for Bieber, I find myself saying defensively. I know what this means to her and in my heart I know how I would have done anything, just anything to watch Michael Jackson moonwalk across the stage. 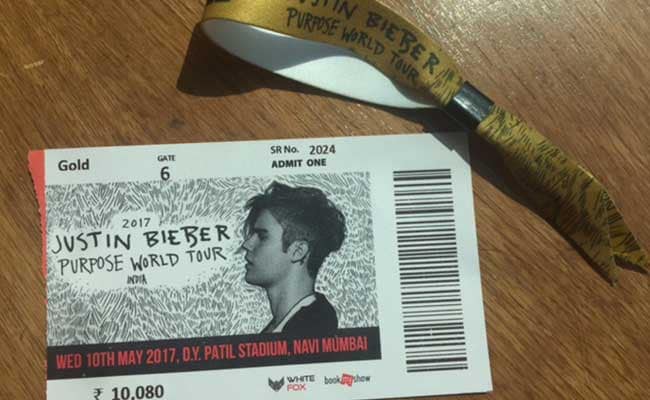 The plane touches down in Mumbai. The air hostess says the temperature outside is around 30 degrees. But inside the plane, its smokin' hot. Bieber fever is at its peak. The teens desperately search for a network to update their status. Beliebe it or not, we're in Bieberland.

Fandom and fan mums fill the lobby of our hotel. Bieber means business and his merchandise has, like the star himself, struck a personal chord with the kids here. "My mama don't like you Bieber" reads a fan's tee shirt. There are Justin visors and Bieber caps. My daughter and her teen gang shyly appear with winged eyeliner and lip balm. It's his "Purpose Tour" after all and they can't appear to be wanting in purpose.

All roads lead to the DY Patil stadium in Vashi. What should be a 15-minute drive takes nearly 45 minutes. Our driver David asks us if a cricket match brings us here. Can't imagine Justin in the Indian Premier League - he's simply in a league of his own. 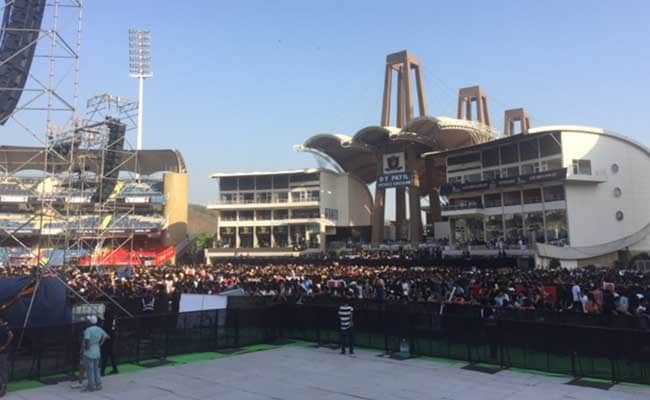 They stream in from all directions braving the long walk and the relentless afternoon sun. An army of young ones marching with purpose to invade the stadium gates, battalions of fans in black and white shirts carrying Bieber posters, Bieber banners. It's like an idea whose time has come. Simply unstoppable.

A roar goes up as a chopper lowers for landing. Could that be Bieberman from the heavens above? Better get used to it fans, there'll be many more choppers landing here today, carrying the elite air wing of the fan force.

It's 4 pm by the time we make our way into the gold enclosure. A ten thousand rupee ticket affords us a side view of the stage and the privilege of squatting on the floor should our legs give way. Young fans press forward near the rim of the enclosure, mesmerized by the glitzy stage and the videos on the giant screen. It's the maiden concert for most of them and they won't risk blinking lest they miss the action. 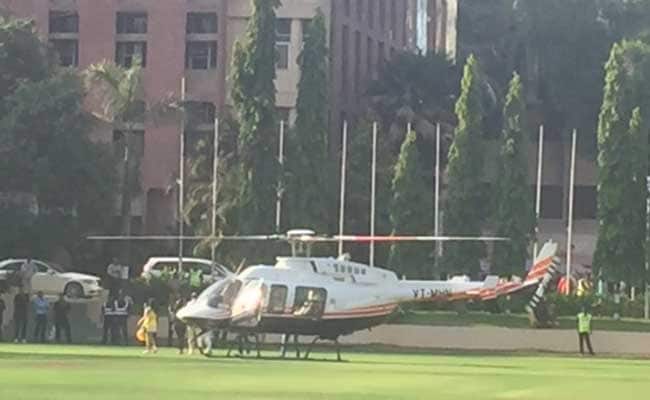 The sun is beating down and I see a smattering of weather-beaten senior citizens, age 40 and above, sitting cross-legged on the floor at the back of the enclosure. It's a matter of time before my not so practical elevated shoes will force me to join their ranks.

That happens by 5 pm. Mumbai's humidity is clinging to me, making Delhi's searing dry heat feel like a breeze. From my spot on the floor I watch the parade go by. Shorts that barely qualify as shorts and midriffs that reveal Justin fan art. Humidity defying fish net stockings, a throwback to the age of Madonna and bustiers and badass tops. I marvel at the number of blue-eyed girls there are here till the wonders of colored contact lens dawn on me.
The DJ belts out his hit list and the crowd sways to the beat. But the young ones are beginning to wilt in the sun and the crowd is getting restive, waiting for the real thing. 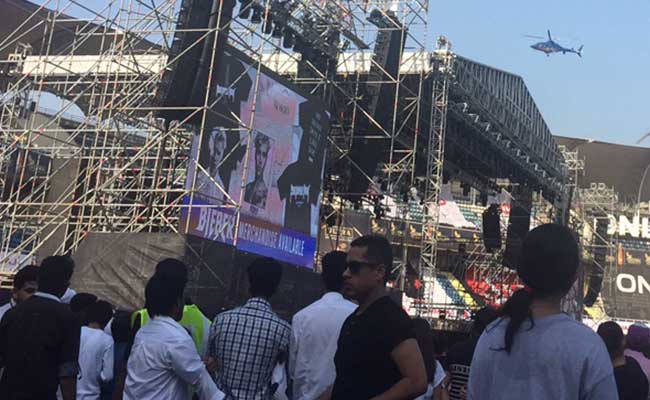 Suddenly at 6:15, a roar rents the air. All eyes and smartphones are trained at a window in a glass building at the far end of the stadium. The king appears, a towel in one hand, a can of soda in the other and through sun glasses surveys his fandom. The ruler of a billion hearts makes some goofy moves that send his subjects into raptures. I want to capture my daughter's awe-struck expression but she has my phone and is busy creating a photo album of her own. I find myself waving and then stop to think when I last waved to a boy with a towel. "Justin I love you" screams the fan next to me and the king disappears from the window after giving his adoring audience a teaser. He is not expected on stage before 8 pm, almost two hours from now.

As night descends, beams of flashing lights sweep the venue and a beautiful moon positions itself in the sky to provide a natural spotlight on the stage. The crowd is swelling and anxious parents position themselves protectively near their wards. This is it. Bieber is here in all his casual majesty.

He blazes onto the stage in a white tee and shorts, his striped socks and sneakers drawing adoring squeals of approval from the stands. Unlike most of us, he's dressed for a sports stadium. The tattooed arms rise up in the air, removing any doubt that this sporty boy is the one they are all here for.

Hysteria is putting it mildly. He croons "baby baby ooh" and tears of pure joy stream down a hundred sweaty faces. The crowd is in a trance, enchanted by the Pied Piper of Canada. "I know you love me, I know you care, just shout whenever and I'll be there". Every girl out there takes him for his word and believes that she's the one. The fans here know the lyrics of every song and thousands of voices sing along in unison as smartphones capture every breath he takes. "As long as you love me, we could be starving, we could be homeless, we could be broke, as long as you love me I'll be your platinum, I'll be your silver, I'll be your gold." 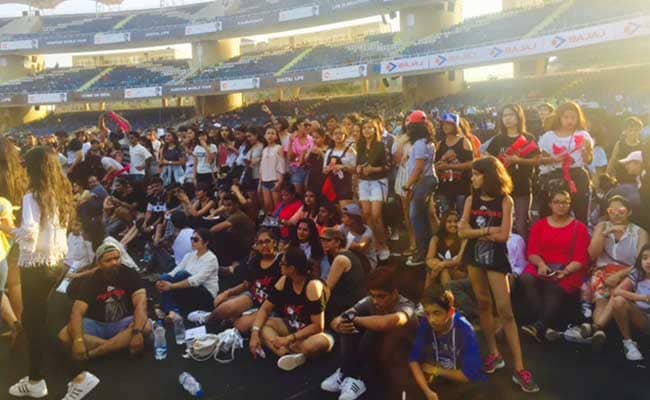 For around two hours he brings DY Patil stadium to its feet. The light from thousands of camera phones sways through the stands as fans allow themselves to be bewitched by a conjurer with dazzling special effects.
The closing act draws near. Bieber orders his subjects to listen quietly as he speaks about the purpose of his Purpose Tour. "No matter who you are, no matter where you're from, no matter how old you are - you all have a purpose...That life is worth living and you need to be the best you can be." Parents nod in approval. Seems like a sensible boy.

There's an exodus from the stadium - dizzy teens with stars in their eyes gradually conscious of their aching legs.

My daughter squeezes my hand and says "thank you mama." The moon looks beautiful tonight.

Promoted
Listen to the latest songs, only on JioSaavn.com
(Gauri Datta Gupta is Executive Editor, Assignment with NDTV 24x7)