Jayalalithaa did it. She pulled off a coup in these elections. Just when everyone was writing her political obituary, she stopped the yo-yo from saying go-go. For the first time since 1984, a party has won consecutive elections in Tamil Nadu. And in doing so, Jayalalithaa and her AIADMK have undoubtedly written the political demise of her chief tormentor, M Karunanidhi, who at 93, is unlikely to lead the DMK into another assembly election.

Agreed, stranger things have happened in politics, but that's another story.

Right now, the party in Chennai is outside Jayalalithaa's house in Poes Garden, where supporters are noisily celebrating the return of Amma. In a rare appearance, Jayalalithaa thanked the people of Tamil Nadu, said that she is "indebted to people for this historic victory" and reiterated her "dedication to the state".

Except for one exit poll, the others - and conventional wisdom - predicted that the DMK would be back, although margins differed. Instead, the AIADMK has won, though with a greatly reduced majority (149 seats in 2011 down to 128 now). She has a working majority of 24 over the DMK alliance. That is quite narrow - if 12 seats changed hands, the DMK would be in power. And that is what must be upsetting the Karunanidhi family: so close, and yet unable to grasp power.

It has only itself to blame in its inability to bring together the alliance needed to topple Jayalalithaa. The PMK of Anbumani Ramadoss was an ally of the DMK last time around, but decided to fight on its own this time in all the seats in the state. By doing so, it surely ate into some of the DMK or anti- Jayalalithaa vote or both. 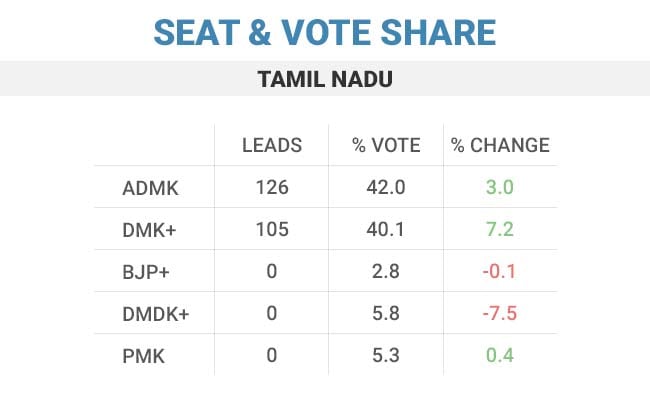 Early data shows that the DMK has added 7% vote share, but that has not been enough to catch the AIADMK which has also picked up votes - so the DMK only reduced the gap by 4%. NDTV had earlier projected that a 5.75% swing from the AIADMK to the DMK with a low IOU (Index of Opposition Unity) would have seen the DMK win. That has not happened. The IOU is higher (less fragmented), and the net swing lower. If, however, the PMK had allied with the DMK, that could have made all the difference.

Similarly, the DMK tried very hard to get "Captain" Vijayakanth and his DMDK on board. This failed as Captain decided to lead a six-party Third Front. Not a great move - he has lost his own election too.

One of the areas where the DMK did make an impact, though perhaps not as much as it could have, was in the North, where it was expected to pick up a lot of seats, especially in the areas around Chennai that were flooded last year. And while the AIADMK did lose 15 seats to come down to 42 in this area, it really wasn't enough to tilt the balance as they remained reasonably solid throughout the rest of the state, retaining 84 of the 92 seats they had. 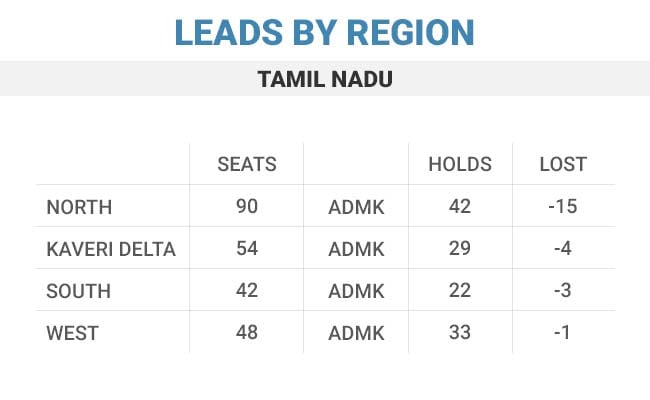 There has also been conjecture that the Congress under-performed as an ally by not winning enough of the 41 seats it was allocated. On face value, this seems to bear out. Of the leads at the time of writing, the "win%" of the Congress was less than half that of the DMK. So it would seem that the Congress could be blamed for a big chunk of the alliance's loss. 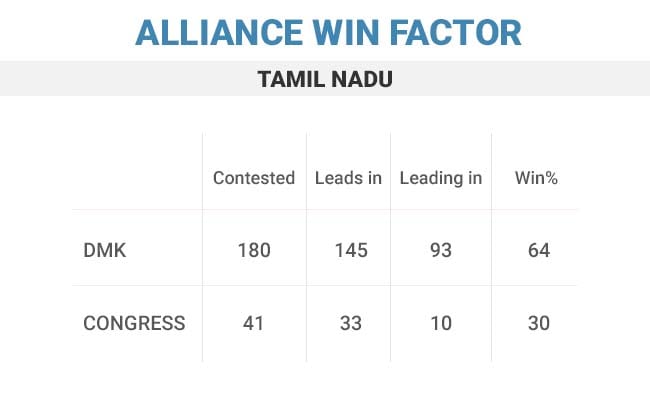 The Congress' counter to this would be that of the 41 seats, it contested, in 14 of them, it had to overturn margins between 10-20% - and in 12 seats, margins greater than 20%. That was perhaps a tall order given that so far, the average gain by the alliance is 7%.

There are other less mathematical reasons being used to explain Jayalalithaa's victory - from her increased giveaways to stressing in speeches that she is devoting her life to the people, while the DMK's leaders are devoting their lives to their families and the warring for power between them.

The fact is that all of the above-mentioned reasons combined to keep Jayalalithaa where she is, ending the revolving door pattern of over three decades in Tamil Nadu.

The figures in this article are based on the time of writing and are strongly indicative of trends.