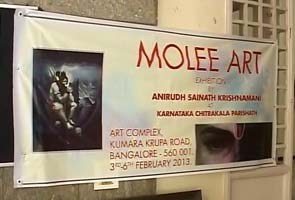 Bangalore: At an art gallery in Bangalore, three paintings are placed facing the wall. The artist, 22-year-old Anirudh Sainath Krishnamani, was ordered by the gallery to take them down after a BJP politician declared them offensive.

"The police came here and said either you remove the pictures or we will close the exhibition. So it was a huge pressure on us and we had to remove the pictures," says the artist. Nearly 35 of his other works remain on display at the Chitrakala Parishat gallery.

Shiva Kumar, who is from the BJP and serves on the local corporation, says the nude depictions of the Goddess Kali, Shiva with Sati, and Mohini, often considered the female incarnation of Vishnu, are in poor taste. He says he phoned the police to complain.  "I have reported to chief coordinator of Chitrakala Parishat - saying you people should not show like this, Hindu gods and all. We have our own belief, we have our own culture," he said.

The police says that Mr Kumar did not file a written complaint and that it informed the gallery about his phone call, but did not ask for the paintings to be removed.  The government says it has no reason to intervene. If anybody complains, I will take action," said Home Minister R Ashok.

The artist's father, a senior Supreme Court lawyer named MN Krishnamani, told NDTV, "There is absolutely nothing objectionable in his paintings. If that is so, then all temples should be destroyed."
Comments
Bangalore art exhibition