BJP MLA Uday Garudachar, who came to the protest venue told NDTV, "We, the elected representatives, are doing our best to see the bank is revived." 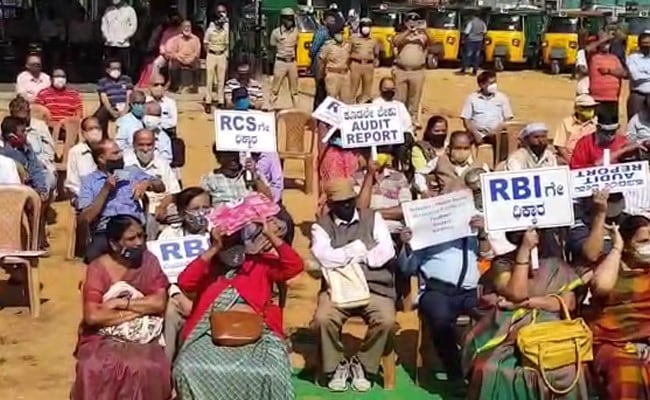 A large protest broke out yet again today.

A large protest was held yet again in Bengaluru today to seek relief for the depositors of the crisis-hit Guru Raghavendra Cooperative Bank as they urged the Reserve Bank of India to resolve their issues without delay. The bank had hit the headlines in January when the RBI began an investigation into the financial irregularities amounting to over Rs 1,400 crore.

The central bank had imposed a set of restrictions early January for the "next six months or until further review" at the time. The bank was not allowed to carry out any further transactions and the amount of withdrawal allowed to each depositor was limited to Rs 35,000.

After the RBI move, depositors, many of them elderly, stood in long queues to withdraw the permitted amount. The limit of withdrawal was raised to Rs 1 lakh in June - which once again saw queues - despite the coronavirus pandemic having started by then.

Pratima, who is president of a group formed by depositors told NDTV, "We have all been struggling for the last one year. Out of the 41,000 depositors, 85 per cent are senior citizens. Can anyone tell me, in a place like Bangalore, how can we live for one year with a release of just one lakh rupees? Does the government mean I can manage my life on Rs 10,000 a month in a place like Bangalore? There are senior citizens who don't have money to buy their medicines."

"Everybody has saved for a rainy day. And today there is a pandemic. Everybody has problems. It is high time that RBI, and authorities wake up to give us some relief from the misery we are passing through from the last one year. We didn't go to the stock market. We tried to protect our money in a fixed deposit in a bank licensed by the RBI. And today that money is not available to us. What are we to do. We have been hearing assurances for the last one year. We don't have patience any more. We need action," she added.

BJP MLA Uday Garudachar, who came to the protest venue told NDTV, "We, the elected representatives, are doing our best to see the bank is revived. That the people who have cheated the people, the management -  Ramakrishna and his son - are behind bars. The government of Karnataka, the government of India, even our honourable finance minister is very keen that the bank is revived. Rome was not built in a day. It takes a little time. In three-four months, we should see a silver lining in the dark clouds.

Harish, a depositor, was not too hopeful about political help. He said, "There are politicians who came here and said they will do it. They have not done anything. The new administrator who has come, Mr Ashokan, he is a senior retired banker and he is trying to revive the bank. Things are starting to move now."

"The state government has completely failed in its duty. The only hope is that the new administrator will do something. I was in the delegation that met Nirmala Sitharaman. She also spoke about how the law works. But she did not do anything. Neither central nor state government is doing anything."