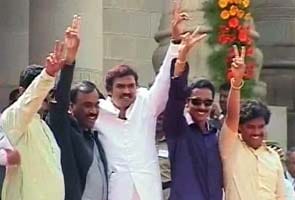 Janardhan Reddy (second from left) and B Sriramulu (in white). File photo

Bellary: The iron-ore rich district of Bellary in Karnataka shot into national prominence politically in 1999 when Congress chief Sonia Gandhi took on and defeated the BJP's Sushma Swaraj in the Lok Sabha elections.

In the 2008 Karnataka assembly polls, the Reddy brothers - Karunakara, Janardhan and Somashekara - and close friend B Sriramulu were flying high - quite literally - using helicopters to travel for their campaign as they delivered the district to the BJP.

But a lot can change in five years.

The other brother, Somashekara Reddy, has one mission. "My main task is to ensure the release of Janardhan Reddy," he says.

The Reddys' close aide, Mr Sriramulu, walked out of the BJP and is ploughing a relatively lonely furrow with his BSR Congress, which he hopes can be a kingmaker if there is a fractured mandate.

He indicates he would support former chief minister BS Yeddyurappa's party, the Karnataka Janata Paksha (KJP), or the JD(S). "Totally, the hung is coming (sic). KJP or JD(S) - we are supporting only regional parties because we seek development of our state," Mr Sriramulu said to NDTV.

"I miss my closest and dearest friend Janardhan Reddy," he added.

The Reddys aren't history. People we spoke to in Bellary city still claimed to support them. "They have done the roads well. He is in jail now, but the people of Bellary will support them. We are supporting the Reddy brothers," said a resident.

Bellary is a land where the millionaire mining politicians can't quite remember how many crores they have. The Reddys did change Bellary's politics with their incredible wealth. They also face charges that they used their wealth to win votes and the support of legislators.

Asked how much wealth he had officially declared as he filed his nomination, Mr Sriramulu said, "I have no idea. I think my chartered accountant has filed. Rs 30-35 crore. I have a small amount."

Another mining millionaire, Anil Lad of the Congress, is not badly off himself. In a region where mine owners were minting money from the iron ore boom, he admits the role it plays.

We asked if he had also used money to fight elections. "You have to fight an opponent with all the weapons he uses. The same weapon you have to use," Mr Lad said.

Mr Lad was with the BJP and switched to the Congress. He lost in 2008 to Somashekara Reddy. This time he is hoping to be part of what many people see as a good chance for the Congress to recapture the state in the elections next month.

"We just won the Bellary City Corporation two months ago, so the trend is towards the Congress," he said.

Promoted
Listen to the latest songs, only on JioSaavn.com
Bellary was a Congress stronghold since Independence until the Reddys arrived on the scene. Their waning political influence could be the break the Congress was looking for to reclaim Bellary. The battle for this area of red earth and high grade iron ore is definitely on.