Read inOther Languages
This Article is From Nov 07, 2019

Andhra Officer "Panicked", Tied Rope As Barricade In Her Office

Vijaya Reddy, a tehsildar with the state revenue department, was burnt alive by an angry land owner at her office in Abdullapurmet on Monday. 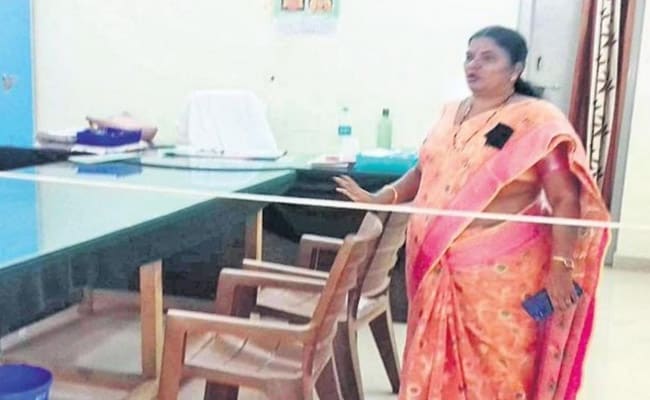 Uma Maheswari tied up a rope inside her office to stop people from coming close to her.

Uma Maheswari, a tehsildar in Andhra Prasesh's Kurnool, meets her visitors sitting across a rope that has been put up in her chamber. Those who want to give their letter, documents are asked to handover from a safe distance.

The official says that she was forced to take the measures after a revenue official in neighbouring Telangana was set on fire by a villager.

"I panicked after Vijaya's murder . Yesterday some people came to my office without any application, they were drunk. Seeing them in such condition scared me. So I tied a rope creating a barricade between my chair and the visitors," Maheshwari was quoted as saying by news agency ANI.

The Tehsildar, however, clarified that she had removed the rope after an hour.

"The rope was tied for only an hour, later I removed it. I did so only out of fear," she said.

Vijaya Reddy, a tehsildar with the state revenue department, was burnt alive by an angry land owner at her office in Abdullapurmet on Monday. Two staff members, including Vijaya's driver Gurunatham (27), who came to her rescue too were seriously injured.

According to witnesses, the accused visited Ms Reddy's office with passbooks related to his property and set her on fire. Although Vijaya Reddy's fellow-employees wrapped her in a blanket in an attempt to douse the flames, she died soon afterwards.

Sources said that the accused had sneaked a bottle of kerosene into Vijaya Reddy's office along with his land documents.