The hailstorm began around 6:15 pm and continued till 6:45 pm. Trees and electric poles were uprooted, and sheds collapsed, leaving hundreds stranded. 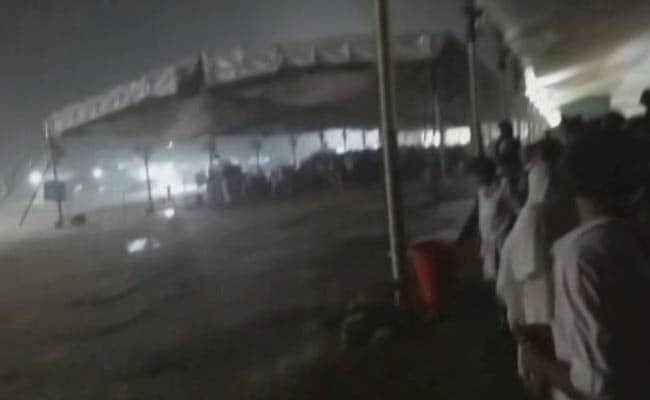 Two people were killed as sheds near the stage collapsed. Their identities are yet to be confirmed by authorities. Many were injured and children were missing in the chaos that followed the cloudburst, officials said.

Bad weather forced Chief Minister N Chandrababu Naidu and his wife to remain confined to the guest house at Kadapa, reports said. They finally could reach the venue well past 9 pm.

Elaborate arrangements were made for the Sita Rama Kalyanam by the Tirumala Tirupati Devasthanam. Devotees had thronged the temple in large numbers to be a part of the Kalyanam on Friday evening. But sudden heavy rain coupled with strong winds, lightning and hailstorm pounded the area.

The hailstorm began around 6:15 pm and continued till 6:45 pm. Trees and electric poles were uprooted, and sheds collapsed, leaving hundreds of people stranded in bad weather.

Promoted
Listen to the latest songs, only on JioSaavn.com
Electricity supply was disrupted and people panicked, unable to find a way to escape.