''You Killed Me, Too'': Mother Of Slain Police Officer To Her Murderer

Ronald Hamilton faces the death penalty in the shooting deaths of his wife, Crystal, and Prince William police officer Ashley Guindon, who was working her first shift. Police officer Ashley Guindon was shot to death in 2016, while on her first day on the beat.

The mother of slain Prince William County, Virginia, police officer Ashley Guindon looked straight at her murderer Tuesday in a county courtroom as she described the pain he'd inflicted.

"Ronald Hamilton, you not only killed my daughter," said Sharon Guindon, addressing the former Pentagon I.T. specialist. "You killed me, too."

Hamilton was convicted of capital murder last month in the 2016 fatal shooting of his wife and rookie officer Ashley Guindon, who had been on her first day on the beat.

Sharon Guindon had largely kept quiet since her only child - just 28 years old - became the first Prince William officer killed in the line of duty since 1990. But as a jury weighs whether to give a death sentence, she swiveled in the witness stand to face the murderer and declared: "Ronald Hamilton, you took the one person that meant the world to me. I have an emptiness that will haunt me for the rest of my life." 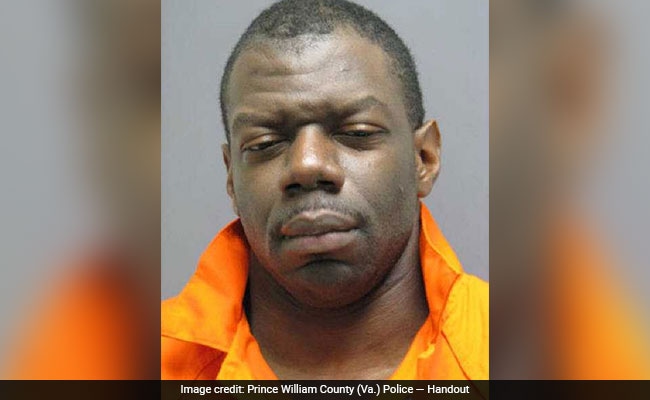 Ronald Hamilton faces the death penalty for killing his wife and a police officer.

Hamilton, 34, who was an Army staff sergeant, covered his face with his hands as she spoke. He shot his wife, Crystal Hamilton, at their Woodbridge, Virginia, home during an argument the night of Feb. 27, 2016. When police arrived, Hamilton fired at three officers, wounding two and killing Ashley Guindon, a former Marine reservist who'd just been sworn in as a Prince William, Virginia, cop the day before.

Sharon Guindon's gutting remarks - along with the emotional testimony of Crystal Hamilton's mother, Cherry Murphy - were the final piece in the prosecution's argument to impose the death penalty. If the 12 jurors agree, he would become the fourth person on Virginia's death row.

Hamilton's defense team plans to call friends, relatives and colleagues, including some from the military, to testify on his behalf. It's unclear whether Hamilton will go on the stand himself.

Even before the mothers were called to the witness stand, many in the courtroom pews were already tearing up in anticipation. Officials passed a tissue box to Guindon, and her brother, Walter Nowak. Numerous members of Prince William's police force, including chief Barry Barnard, sat behind the prosecutor's table.

On the witness stand, Guindon recounted how she learned her daughter had been shot. She'd been relaxing at her New Hampshire home when her phone rang. The number was from Virginia, so she thought it was Ashley.

"I heard a man's voice," Guindon said. "I knew it was something bad."

The man told her Ashley had been shot and was in a hospital. Moments later, Merrimack, New Hampshire, police officers were at the front door. They tried to calm her down and asked if she had anyone close who could come over. She said she had a neighbor, but that was it.

Guindon is a widow; her husband, David Guindon, 48, a tech sergeant in the Air National Guard, shot himself to death in 2004 the day after coming home from an Iraq deployment.

After learning Ashley had been shot, she reached a nurse at Inova Fairfax Hospital, who told her she needed to get there by the evening. But Guindon said the earliest she could make it was by morning. Guindon asked where her daughter was hit, and the nurse said the shoulder.

But suddenly more police showed up at her house. An officer arrived and handed her a cellphone. It was the doctor overseeing Guindon's rescue.

"She told me Ashley had died . . . she tried everything to save her life," Guindon recalled. "I just collapsed. I couldn't believe what I was hearing."

Many of the 12 jurors tried to hold back tears, rubbing their eyes. Hamilton kept his hands over his face. At one point, he could be seen from behind shaking.

She reminisced about the time Ashley learned how to ride a bike without training wheels and her early interest as a teenager to one day become a model or actress. "She was truly a fashionista," Guindon said. Her daughter got into gymnastics, cheerleading and loved collecting purses, shoes, clothes and makeup.

Guindon said her late husband and Ashley shared a bond.

Without mentioning his suicide, Guindon said, "her father died while serving his country . . . they both were motivated by love of country."

At Merrimack High School, Ashley joined the JROTC, graduating in 2005. In 2007, she enlisted in the Marine Reserves and, according to her police biography, later graduated from Embry Riddle Aeronautical University in Florida. After moving to Virginia, she applied to become a Prince William police officer and was sworn in on Feb. 26, 2016. The department tweeted out a photo of her and said, "Be safe!"

The loss of her daughter, Guindon testified, also meant the loss of unmet hopes. "I'll never be the mother to the bride," she said, "or a grandmother."

"I will never get to hold those children," Guindon said.

During her testimony, Crystal's mother, Cherry Murphy, was equally distraught.

She'd driven from her home, then in South Carolina, to the scene of the crime on 13000 block of Lashmere Court in Woodbridge, Virginia. When she arrived, she asked, "Where is Crystal?"

An FBI agent said she was sorry.

"That's all I remember," Murphy said, adding that she'd then lost consciousness briefly.

"I'm broken. My life will never be the same again. When she died, I died along with her," she testified.

During a break in the hearing, a Washington Post reporter asked Murphy if she hoped the jury would sentence Hamilton to death. She said yes.

(Except for the headline, this story has not been edited by NDTV staff and is published from a syndicated feed.)
Comments
Ashley GuindonRonald Hamilton