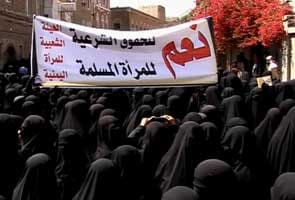 Activists in Yemen have been pushing for a draft law that sets a minimum age for marriage.

Sanaa: Forced into marriage when she was only 13, Saadah is now back in her impoverished Yemeni family's cramped home with two children, little money and dreams of returning to school.

"I don't want a husband ever again. All I want is to get a divorce and study," Saadah says as she sits in the small room she shares with her two boys, dark circles shading her weary eyes.

"Child brides" or "death brides" as they are sometimes called, are quite common in poor, tribal Yemen, where barely pubescent girls are forced into marriage, often to much older men.

Saadah's ill father, no longer able to sustain his family, married her off five years ago in an attempt to spare her from her family's poverty.

But her husband soon began forcing her to beg on the capital's streets with her boys until she fled back to her parents' home.

"He would beat and verbally abuse me and my family," says Saadah, now 18, whose name means happiness in Arabic.

She is dressed in black from head to toe, but there are still traces of fading orange henna on the fingernails of her fidgety hands. Her two boys, aged three and four, look on as she recounts the nightmare of her marriage.

"My life is difficult with my parents, as we rely on small amounts of aid from our neighbours to survive. But this is still better than living with my husband," Saadah says.

Her 16-year-old sister Amnah was also forced to marry, and wed a man who agreed to pay her father's 20,000 riyals (93 dollars) worth of debt three years ago.

"I am a victim of early marriage," says Amnah, who was also abused by her husband before she escaped after just five months with him.

"He once put a dagger to my stomach and dragged me out of my parents' house. He then beat me on the street in front of everyone before taking me back to his house," she recalls shyly.

She finally went back to school this year.

Activists have been pushing for a draft law that sets a minimum age for marriage.

Human Rights Minister Huriya Mashhoor told AFP last month she wanted to revive a 2009 bill -which would have set the minimum age for marriage at 17 - and amend it to raise the age to 18.

Activists say the bill was shelved when ultraconservative lawmakers from the Islamist Al-Islah party blocked it.

'Rape under the pretext of sharia'

Before the unification of Yemen in 1990, the legal age of marriage was set at 15 in the north and 16 in the south. But legislation in the united country does not specify any age limit.

Human Rights Watch said last month that 14 per cent of girls in Yemen are married before the age of 15, and 52 per cent before 18, citing Yemeni figures and 2006 data from the United Nations.

In certain rural areas, girls as young as eight are sometimes given in marriage to much older men.

The husbands of child brides often "beat and abuse them, deprive them of food, and force them into sex," according to Ahmed al-Qurashi, head of Seyaj, a Yemeni organisation for the protection of children.

"This is rape under the pretext of sharia (Islamic) law," says Yemeni activist Arwa Othman.

Last month, reports emerged that an eight-year-old girl named Rawan had died from internal bleeding after sexual intercourse, following her marriage to a 40-year-old man in a remote area in the north.

Authorities have denied the claims, and presented to reporters a girl who claimed she was Rawan and was never married.

But in April 2010, 13-year-old Ilham al-Ashi died after being raped by her husband a few days into her arranged marriage, and in September 2009 a 12-year-old wife died along with her baby during delivery.

Girls are usually afraid of speaking out against their parents' decision or reporting abuse in a society where a woman is traditionally shamed if she rejects marriage or defies her family.

But in a case that shook Yemen's conservative society in 2008, a court granted a divorce to eight-year-old Nojud Mohammed Ali, whose unemployed father forced her into marriage with a man 20 years her senior.

While some neighbours sympathise with them, Saadah and Amnah are still sometimes met with reproachful stares on the streets.

"Some people look down at us because we escaped from our husbands' houses," says Saadah.

However, their 14-year-old sister Nemah says she has learned from their bitter experience.

"I will only get married after I've continued my education," she says with a smile.