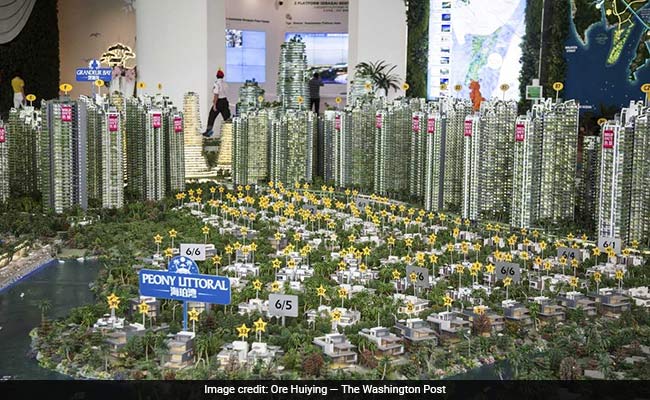 The hopeful buyers, busloads of Chinese for a Chinese-built project, were guided around the showroom. They all got the pitch about how a new city of 700,000 people - "jade carved out of the ocean" - would rise out of coastal palm plantations and reclaimed land just north of Singapore.

But there was one important element left out of the glowing promises for Forest City.

Malaysia's new government, led by senior statesman Mahathir Mohamad, has swiftly moved to block or amend the rules for major Chinese-led works in the country, canceling a slew of projects including a $20 billion railway and two gas pipelines totaling $2.3 billion.

For the $100 billion Forest City project, it could mean no sales for foreigners, effectively killing the target Chinese market for the planned development. 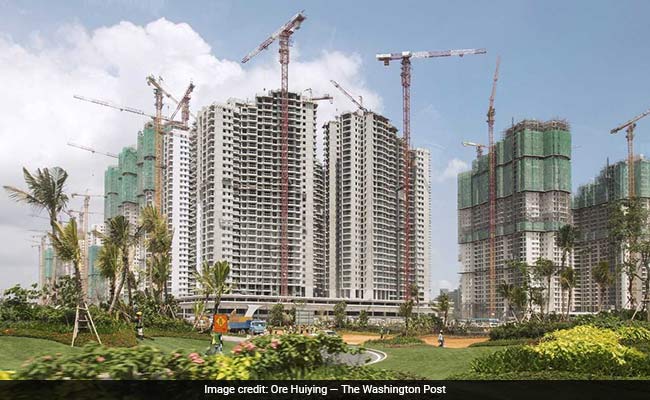 Construction continues at Country Garden's Forest City, despite a move by Malaysia's new government to turn against Chinese-backed projects.

The tougher line by Malaysia - and the 93-year-old Mahathir - marks perhaps the most powerful slap yet at China's fast-moving economic expansionism in the region and beyond.

Beijing calls it the "Belt and Road" initiative. Critics, like Malaysia's Mahathir and others in Asia, call it an attempt by China to become the unchallenged economic big brother in the region and indirectly influence political affairs through its spending.

There are also long-term fears that Chinese-funded projects will leave countries with decades of debt - on the hook to maintain the ports, railways and other points on what many call Beijing's modern Silk Road. 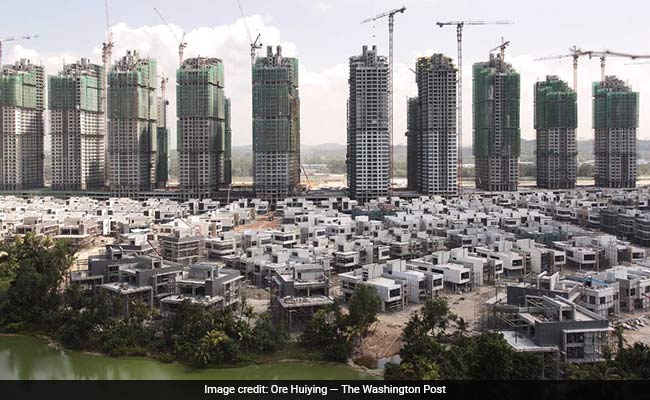 "You don't want a situation where there's a new version of colonialism happening because poor countries are unable to compete with rich countries," Mahathir said during a visit to Beijing in August.

The blowback from Malaysia is particularly worrisome for Chinese leaders.

Malaysia is wealthy and strategically located, making the projects more important to China's broader agenda of developing new trade routes. China also cannot come down too hard on Malaysia, one of its largest Asian trading partners.

To rub it in, Mahathir announced the policies at a joint news conference with Chinese Premier Li Keqiang during his talks in Beijing.

Days after his return to Malaysia, he took aim at Forest City, announcing that no foreigners will be allowed to live there even as crews rush to complete some residential towers before buyers move in later this year.

This was a surgical strike against Country Garden PacificView, China's largest property developer by sales. About 80 percent of buyers of the 18,000 units so far have been Chinese. Sales galleries for Forest City are scattered all over China.

Signs across the island are in Mandarin, and a branch of a Minnesota-based private school there offers only two languages: English and Mandarin. 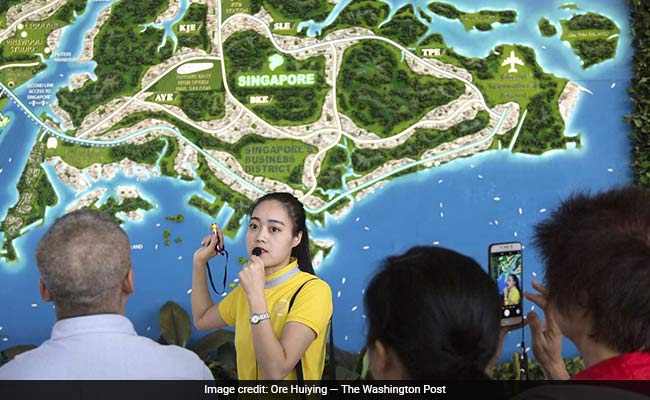 A saleswoman talks to visitors at the Country Garden Holdings property showroom in Johor Bahru, Malaysia.

The project is tantamount to "building a huge Chinese city in Malaysia," said Lim Guan Eng, Malaysia's finance minister. "That leads to questions about not only our national sovereignty but the social contract, [which will] have to be worked out or there will be imbalances."

Country Garden says it has "complied with all laws and regulations with the necessary approvals to sell to foreign purchasers" and is "in talks" with the prime minister's office.

The company "is unable to provide any information as discussions are in the initial stage," a spokesman for Country Garden said. Malaysia's Housing Ministry has also formed a committee that will "review whatever terms that were agreed to previously" and decide how to move forward.

Privately, though, the Chinese developer is worried it may be too late.

Speaking to The Washington Post, a Country Garden official said his company "was kind of forced" to bill its projects as part of Chinese President Xi Jinping's broad "Belt and Road" initiative in a bid to gain Beijing's support.

Promotional banners at Forest City's showroom boast of the support the project has from the Chinese embassy in Malaysia and senior Chinese government figures. Forest City's website describes the duty-free zone as the "standard demonstration zone of " 'One Belt One Road' in Southeast Asia."

Mahathir, in a campaign speech before his opposition coalition reclaimed power in the May elections, said he would rather the Forest City project turn into an actual forest, with baboons and monkeys living there instead. 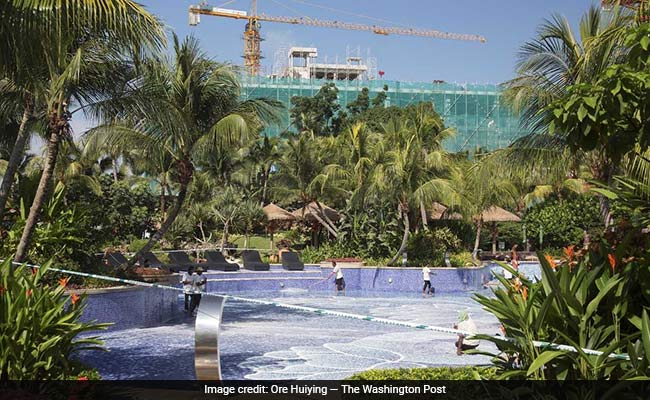 An official at Country Garden said Malaysia's government officials are pushing the developer to diversify future residents of Forest City by marketing to Vietnamese, Indonesians and people from the Persian Gulf states.

Malaysia does not "want to see the Chinese taking over Malaysian land," said the Country Garden official, who spoke on the condition of anonymity as he was not authorized to speak to the media. "They hate the way we do business. It is clear that the price of the property is too high for Malaysians, and [we have] specifically marketed toward the Chinese."

Malaysia is not the first country to turn against Chinese-backed projects. Pakistan, Nepal. Myanmar and other nations are working to scale back efforts pushed by Beijing, some under new political leadership.

"The domino effect certainly is something to worry about," said Tan Chong, a professor at Jinan University who studies the relationship between China and Malaysia.

"It does serve as an alarm to other projects," he added. "We need to have contingency plans."

China has responded by trying to gently reframe the Belt and Road Initiative. In a recent speech, Xi described the projects not in economic terms, but rather as a diplomatic tool that could unite much of the world.

China "should be considerate of image issues" around Belt and Road, said Yanmei Xie, an analyst in Beijing.

In Forest City, the contrast is stark.

It is hard to see anything but Chinese links at the city-in-progress.

Sales strategies included offering free trips to Malaysia and Singapore to Chinese nationals who purchased Country Garden property back home, according to multiple buyers interviewed by The Washington Post.

Showrooms were set up across major Chinese cities and, in 2016, a new flight route was launched between Guangzhou and Johor Bahru, adjacent to Forest City's headquarters in Foshan.

In August, a Forest City branch of Shattuck-St. Mary's school, a hockey powerhouse in Minnesota, opened in Forest City. Sixty percent of 78 students enrolled here are Chinese. Tuition for a day student between grades 6 and 12 average $24,000 per year - about four times the average annual wage in Malaysia.

The school's Olympic-size pool, tennis courts, basketball court, yoga studio and boarding facilities - all deserted on a recent visit - were built for 1,000 students.

"The people who working in the area probably can't afford to live here," admitted one salesperson, declining to be named as he was not authorized to speak to media. "The majority of our buyers are foreign, and we are worried it would be an empty city if they don't come."

The shift in sentiment in Malaysia have spooked Forest City buyers, some of whom have sold businesses back in China and moved their families in the hope of a better education for their children or to have a second home for retirement.

"I thought it was a good investment, and I could live there in the future," said Zhan Xinwu, a 24-year old from Shenzhen who bought a two-bedroom apartment in 2016, using all his savings for the down payment.

Even if he chose not to live in Malaysia, he hoped to sell the flat in a few years for a profit, but thinks that might be "impossible" now.

The Country Garden official said Malaysian government officials now are pushing them to market their project to Vietnamese, Indonesians and those from the Persian Gulf states to diversify Forest City's residents, and change perceptions that this is a Chinese-developed project for the Chinese market.

"We aren't very good at doing that," he admitted. "We basically rely on the Chinese market."

The Washington Post's Amanda Erickson and Luna Lin in Beijing contributed to this report.

(Except for the headline, this story has not been edited by NDTV staff and is published from a syndicated feed.)
Comments
Forest CityForest City in Malaysia