Russia-Ukraine war: Ukraine's forces have been pushed back from Severodonetsk's centre with the Russians controlling 70 to 80 per cent of the city. 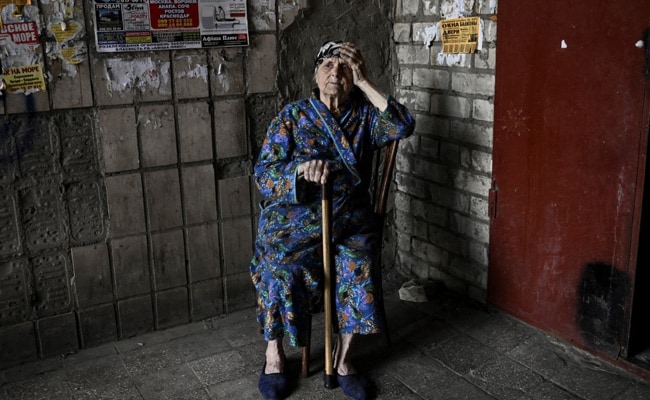 A woman sits at the entrance of an apartment building in Lysychansk, in Ukraine's Donbas region. (AFP)

The wives of Russian soldiers fighting in Ukraine's Donbas region organised a protest, seeking information about the whereabouts of their husbands. It has been more than 100 days since the war began and Russia's recent focus has been on the Donbas region in eastern Ukraine.

A video of the women's protest has surfaced on social media in which they are heard complaining, according to a Newsweek report. The women, speaking in the local language, say they haven't heard from their husbands in four months and that they are not being given any information, the outlet further said.

"We are the wives of the mobilised from the 121st regiment, 2nd battalion. At the moment we don't know, for four months, where our husbands are," a woman is heard saying in the video, according to Newsweek.

The protest took place in the breakaway Donetsk People's Republic (DPR) last week. The men from the region were ordered to mobilise in February, just days before the Ukraine war began.

This comes just days after a protest in neighbouring Luhansk region in eastern Ukraine last month. The women there demanded an end to forced mobilisation and an investigation into all such cases.

Ukraine President Volodymyr Zelensky, meanwhile, said on Tuesday that battle against Russian troops in Donbas will determine the course of the war.

"Hanging in there in Donbas is crucial. Donbas is the key to deciding who will dominate in the coming weeks," he said in a video address.

Ukraine's forces have been pushed back from Severodonetsk's centre with the Russians controlling 70 to 80 per cent of the city in their attempt to encircle it, according to regional governor Sergiy Gaiday.

Capturing Severodonetsk would open the road to Sloviansk and another major city, Kramatorsk, in Moscow's push to conquer Donbas, a mainly Russian-speaking region partly held by pro-Kremlin separatists since 2014.